Gigi Villoresi: A Life Lived as a Champion, from Grand Prix to Formula 1 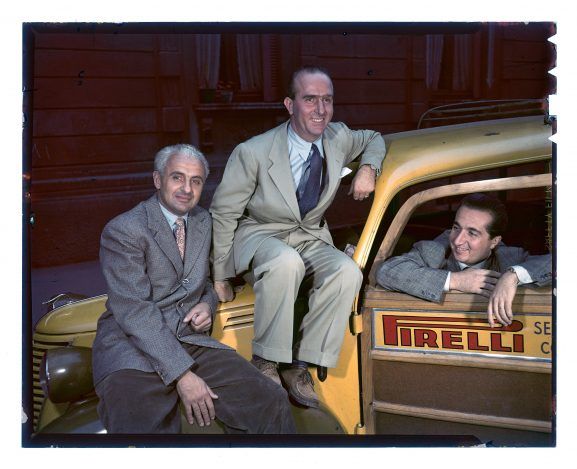 On 16 May 1909, a future racing champion was born in Milan: Luigi “Gigi” Villoresi was to live a life of Grand Prix and classic road races, in Maseratis, Ferraris, and Lancias, spending an entire career racing on “Victory Tyres” – the Pirelli Stella Bianca and Pirelli Stelvio. He came from a family of illustrious botanists and was the grandson of Eugenio Villoresi, who designed the Ticino channel, which was named after him, but the story of this driver was to have another name and another symbol: that of Maserati and its trident, the car manufacturer that, together with Alfa Romeo, epitomised the glorious pre-war years of Italian motor racing. The good outcome of his debut in a Maserati 4CM at the Coupe du Prince Rainier race in Monte Carlo in 1935 brought him to the attention of Ernesto Maserati, who immediately signed him up in the official team. From then on, Villoresi spent ten years notching up victories in Grand Prix and Targa Florio races, also sharing his wheel with the young up-and-coming Alberto Ascari.

Villoresi had already twice been proclaimed absolute Champion of Italy when Enzo Ferrari decided that he could not do without his talent: the transition to the Prancing Horse team came at the same time as the birth of Formula 1, in 1950. Ascari was there with him, of course, driving the new Ferrari 125, which was attempting to make a definitive assault on the historic rivals Maserati and Alfa Romeo. It was an exciting four years, first with the Ferrari 375F1 and then with the 500, and Pirelli Stelvio tyres made a decisive contribution to the World Championship victories of his friend and teammate Alberto Ascari. In 1954 Villoresi embarked on a new adventure with the Lancia D50, once again with Ascari, until the accident in Monza, on 26 May 1955, in which Ascari lost his life and which ended Vincenzo Lancia’s dreams in the top flight championship. Villoresi’s last races were back with Maserati, but he also allowed himself a victory at the 1958 Acropolis Rally behind the wheel of a Lancia Aurelia GT. Gigi Villoresi was a driver who was in it for the long haul and he was a master for the young champions of the 1950s like Juan Manuel Fangio, as well as Alberto Ascari. We remember him together with Ascari and another motor racing champion, Nino Farina, sitting on the yellow pickup truck of the Pirelli Racing Service: the iconic photo by Federico Patellani, now in our Historical Archive, captures the very birth of Formula 1 in the magical year of 1950.