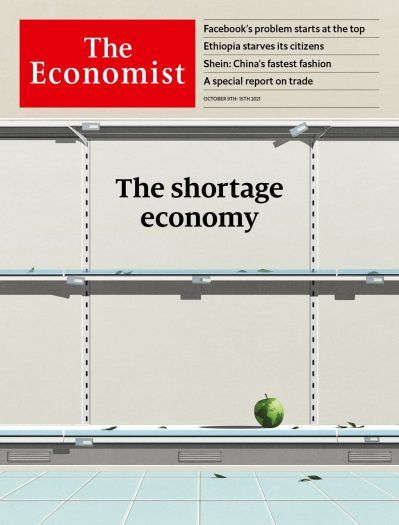 The latest issue of The Economist is entitled “The shortage economy” and tells how a new season of shortages in raw materials and semi-finished products is threatening global wealth. After the great financial crisis of 2008, a long period of austerity began, with limited public expenses and restrained investments. Then, the COVID-19 pandemic radically changed the situation, leading to a strong increase in public expense, both in terms of support and investments, in order to tackle the disease, strengthen the healthcare system, find, test, produce and distribute vaccines, and respond to the social crisis affecting those who lost their job and income due to lockdowns that were indispensable for the containment of the Coronavirus contagion.

The pandemic has also acted as an extraordinary accelerator for several economic and social processes: it has led global public opinions to focus on questions about health and quality of life, it has revived themes of sustainability and circular and civic economies, it has dictated an international public agenda centred on the topics of climate, environment and the safeguard of values that affect our way of living, producing and consuming.

It has brought to prominence the necessity for a “paradigm shift”, whereby the obsession for quantitative economic growth (ruled by the GDP, the index that measures produced wealth) transferred to the assumption of responsibility for a development emphasising quality, calculated according to the “Better Life Index” or, to use an Italian index measure, the BES (Benessere equo e sostenibile), which appraises “equitable and sustainable well-being” (as mentioned in last week’s blog post).

The pandemic is far from over, and it’s still painfully and severely hitting geographical areas and nations where the vaccine is not yet widespread (or where the irresponsible resistance of anti-vax protesters predominates). Yet, by all means, especially in Europe and in other highly industrialised countries, the economy has restarted. But…

Here’s a new threat, identified by a key weekly publication that is considered an authority in international financial sectors. The “shortage economy”, as The Economist explains, is the result of two profound driving forces. First of all, the political choices pertaining decarbonisation, which have accelerated the shift from coal to renewable energies, with a subsequent surge in gas price and, more in general, in all energy prices. The manufacturing industry and part of the consumer industry have been heavily affected by this.

A shift to renewable, non-polluting energies is a vital and urgent one, of course – but it needs to be managed through smart policies, so as not to overburden it with heavy economic and social costs (as exemplified by issues related to electric cars, such as their reliance on particularly strategic raw materials and the disposal of batteries).

The second reason for a “shortage economy” includes the impact of protectionist policies that are spreading worldwide, and that are exacerbating the conflict between America and China, as well as all the consequences on international trade this entails. The general economic climate is overshadowed by the possibility of a growth in inflation caused by these two factors. Some sectors, continues The Economist, fear a return of stagflation (inflation combined with a low economic growth), as it happened in the 1970s, though we should keep in mind that that decade does not have much relevant bearing on our situation.

Nonetheless, essential semi-finished products are scarce on the market, starting with microchips, a fact that is impacting several production industries, from automotive to aeronautics, as well as many more other sectors.

The post-pandemic restart has significantly suffered from this. The financial markets are shuddering. The optimism we felt for growth is dwindling.

Hence, this is the state of affairs we need to deal with when having serious discussions on economic policies and corporate prospects.

One thing is for certain: the era of long supply chains is coming to an end. Long supply chains are too fragile, too vulnerable to the rifts caused by great traumatic events (pandemics, changes in climate, and crises related to cybersecurity, too). Of course, the various world economies are still linked, although even those supply chains are in need of a radical change and many manufacturers of semi-finished products need to be brought closer to final production facilities, both in terms of goods and services.

Europe could be the right space to achieve this – it could avoid the development of small national protectionism and strengthen the role of the EU as a great economic player. Europe could introduce common industrial, fiscal, research, education and – why not? – defence policies (with all that this entails). Europe, thanks to its energy and industrial autonomy, could become a key economic player in the big “three-way match”, together with America and China (as per the title of a very interesting book published by Il Mulino and written by Paolo Guerrieri, professor at the Paris School of International Affairs, Sciences-Po in Paris and at the University of San Diego, California).

Naturally, globalisation would not disappear, it would remain prominent but no longer be absolute. A new balance, markets, production chains and consumer habits could be established. Hence, the EU, with its financial dynamism and blend of market economy and welfare systems, could actually become the paradigm shift affecting the rest of the world and a strong proponent for sensible dialogue and debate, and thus slow down this “unhappy decline”, the advent of a shortage economy.