Sixty years of the Pirelli Tower, the symbol of the “città che sale” (the city rises): a present-day story that spans memory and the ability to plan for the future 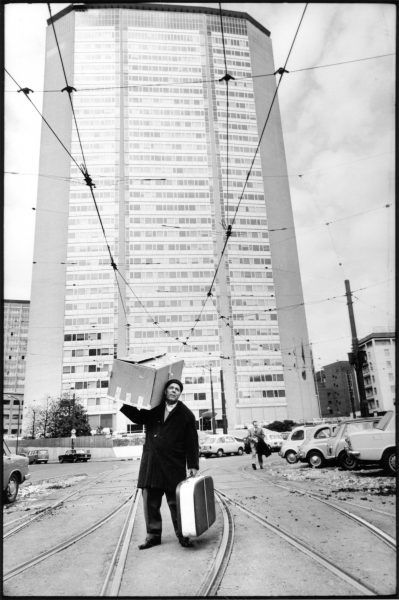 The man walks with the slow and slightly weary step of someone who has made a long journey. He crosses the tram tracks next to Milan’s Central Station, right in front of the Pirelli Tower. On his shoulders, he carries a box tied with string. In his left hand, he has a brown and white cardboard suitcase, heavy enough to make his arm hang down. He has come from Olbia, in Sardinia. In his pocket, neatly folded like something precious, he has a piece of paper with an address in the Rho district, where his relatives are waiting for him, having sent for him with the message “come, there is still work here”. It is late September 1968. The air is grey, bitter, announcing the imminent arrival of the autumn. But on the man’s face, fatigue cannot hide the trace of a shy and somewhat introverted smile, as he looks into the photographer’s lens. Here we are, in Milan at last. Perhaps a new chapter of life can begin here. A hope.

The photographer is Uliano Lucas. And this image of the emigrant and the Pirelli Tower quickly became one of the most effective symbols of an era full of contradictions and conflict, but also of opportunities for change and for recovery.  The roots. And the future. The precarious symbols of a difficult departure (the cardboard box and suitcase) and the grandeur of the solid industrial building, serving to symbolise the economic and social boom. The walk, step after step, on the cold tarmac, strewn with fallen leaves. And the soaring ascent of the skyscraper. The abandoned island to the south, the pain of leaving. And the bustling metropolis that promises a better fate.

This photo by Lucas captures all the recent history of Italy. Our history, from the bright lights of development to the darkest shadows. A history to remember, right now, in these painful, hard times of crisis, with the pandemic and the recession, to which the latest data on “quality of life” – released just yesterday – bear testament: In the annual ranking created by the newspaper “Il Sole24Ore”, after two years in the top spot, Milan has now dropped down to twelfth place (first place goes to Bologna, followed by Bolzano and Trento; at the bottom of the list are Crotone, Caltanissetta and Siracusa), and other major Lombardy cities have also fallen: Brescia is at 39 (-27 places), Bergamo is at 52 (-24), Monza and Brianza at 61 (-55) and Varese at 66 (-37). The Covid effect has been and still is devastating.

And yet, despite the crisis, the fundamental pillars of Milan (business, culture, university, research, services related to quality and innovation) are still strong, and enable the city to look to the future with a reasonable degree of confidence.

And this brings us back to the Pirelli Tower, firmly anchored in the history of Italy, with its foundations designed by Pier Luigi Nervi and the light, elegant and dynamic structure dreamed up by Gio Ponti. And those who first desired it, constructed and inhabited it, from economic bodies to public institutions, have always had the characteristics of Milan and Lombardy in the forefront of their minds: an open and welcoming land.

Milan, at the crossroads between Northern Europe and the Mediterranean, the west and east. Milan, expanding into the fertile space, with none of the natural defences provided by mountains and rivers. Milan, a round city with no sharp edges or corners. Milan, where the gates of the city walls were once used as toll houses, a clear sign of an economy of relationships. Milan, an inclusive city, shaped by the precepts of Bishop Ambrose, the founder of a special ‘Ambrosian rite’ designed to innovate and overlap with the edict of Bishop Ariberto d’Intimiano, who proclaimed in 1018: ‘Those who know what work is come to Milan. And those who come to Milan are free men.’

The emigrant from Olbia captured by Lucas knows nothing, of course, of the history of Ariberto’s edict. But he is fully aware of the possibilities of work; he has listened to relatives and friends telling him that “Milanesi are made”. And so have the tens of thousands of people who have fled the despair of the southern regions and the peasant poverty of Veneto and Friuli since the 1950s, heading to the factories of Milan and other industrial cities in Lombardy, that intersection between the uncertainty faced by economic migrants and the unknown represented by new jobs, responsibilities, opportunities, rights and duties – the conflict and freedom that characterise the working-class condition and carry the (albeit often sour) scent of possibility and growth.

As Walter Benjamin, a restless and far-sighted soul taught us, to write history means giving dates their physiognomy. And as such, here we see the intersection of years and events, history and histories.

It was 12 July 1956 when Alberto and Piero Pirelli laid the first stone of what would become the Pirelli Tower. The works lasted four years, until the building was inaugurated on 4 April 1960. A very short time-scale for the construction of such a building, serving as evidence of the dynamic drive of those years, and of the positive tensions in the country at the height of the economic boom. But this was also an era characterised by a focus on quality. In a lively, fertile Italy, of which Milan served as a linchpin, the expectation was for strong growth. “La città che sale”, finally fulfilling the aesthetic and ethical prophecies of the far-sighted Futurist painter Umberto Boccioni.

Today, sixty years after its inauguration, the Pirelli Tower is at the heart of a new exhibition, organised by the Pirelli Foundation and the Lombardy Region, which will open for a virtual preview on Wednesday 16. The story of this iconic structure is recounted in a book that has just been published by Marsilio, entitled “Storie del Grattacielo – I 60 anni del Pirellone tra cultura industriale e attività istituzionali della Regione” (Stories of the skyscraper – 60 years of the “Pirellone”, spanning industrial culture and the institutional activities of the region”). The tome features prefaces by Attilio Fontana, Alessandro Fermi and Marco Tronchetti Provera, articles by the curators of the exhibition (Laura Riboldi for the Pirelli Foundation and the architect Alessandro Colombo), plus accounts by Piero Bassetti (the first president of the Region), Eva Cantarella, Giuseppe Guzzetti, Uliano Lucas, Carlo Ratti, Gianfelice Rocca and Andrée Ruth Shammah, women and men of politics, culture and the economy. From memories to predictions for the future, their words reveal the perspective of a region that has traversed some intensely dark moments (including the dramatic events of recent months) yet which, despite everything, has always succeeded in leveraging its ability to dream, hope, plan and build. To work.

The Pirelli Tower, an extraordinary landmark brimming with history, is evocative of a host of current themes (beauty, lightness, functionality, aesthetic and design rigour which reflecting the ethics of doing, and doing well), and remains one of the symbols of Lombardy.

And tomorrow? What will Milan and Lombardy be like tomorrow? According to Ulrich Beck, a learned scholar of the most intense metropolitan transformations, “in order to be able to compete, a city must have both wings and roots”. The roots are represented by an awareness of one’s own history. And the wings are essential in order to be able to fly towards future horizons. An sophisticated ability to come to terms with the future of memory.

This metropolis, and this region as a whole, have what it takes to confidently face yet another era marked by the fragility and uncertainties of crisis and by an unprecedented series of opportunities for change and development. Lombardy produces 22% of Italian GDP, and accounts for nearly 27% of all national exports. And indeed, Milan itself is the centre of gravity of the great European manufacturing north; this is where the headquarters of 4,600 of the 14,000 multinationals in Italy are located, and it is home to 200,000 students of universities that routinely take the top spots in the international rankings. Furthermore, Milan holds 32% of Italian patents and is responsible for 27% of the most cited scientific research at global level. A sort of “infinite city”, as the sociologists that are most attuned to development processes call it: a metropolis that is dedicated to coming to terms with an approach to sustainable development that is both global and local – or “glocal“, to borrow the brilliant term used by Piero Bassetti, who remains the voice of responsible public discourse.

For the future, therefore, the conversation centres around smart lands and sensible cities, technological humanism and a sustainable economy, both from an environmental and a social perspective; the focus is on interconnection and better governance of an approach to globalisation that prioritises fair trade, respecting people and their rights. A new type of metropolis living is on the horizon, in which Milan and Lombardy, solidly anchored in the heart of Europe and with their gaze resting on the Mediterranean, can create original syntheses between an industry that has its roots solidly in manufacturing and an expansion into international markets, spanning the values and needs of the various flows (of people, capital, ideas and resources), from genius loci and artificial intelligence, hi tech services and a focus on qualified training for the new generations, encompassing competitiveness, solidarity and social commitment. All of these elements are strong signs – brought to light by the conversations regarding the Pirelli Tower – of an original polytechnic culture, with the capacity to unite humanistic wisdom and scientific knowledge, cutting-edge research and popular awareness.

The economy of knowledge and a focus on quality of life, on widespread social well-being, are solid values that this area is capable of expressing, through its institutions and businesses, its social and cultural organisations. It is a region with a particular aptitude for metamorphosis, and even in the most controversial moments, it knows how to mark the passing time well.

credits:  Sardinian migrant in front of the Pirelli Tower, 1968, photo by Uliano Lucas