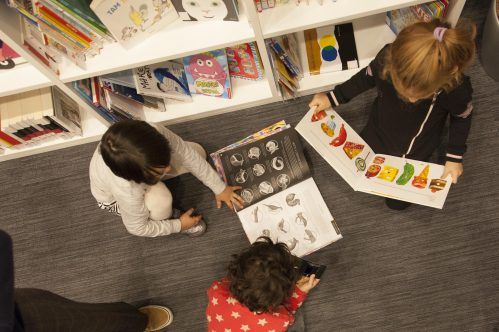 “Reading generates independence” reads a message on a beam in one of the Turin International Book Fair’s pavilions, swarming with almost as many people as in the good old times, a cheery crowd of readers – especially girls and boys – patiently queuing before colourful rooms where they can meet the authors, or busy browsing book after book at one of the 715 stands, and exhibitors who can only feel happy at the sight of such a curious, merry mass of people filled with love for life and knowledge.

In our difficult and controversial times, saturated with fake news and information manipulated for all but cultural and democratic ends, the new challenges posed by an irritating background noise full of loud stories soon to be flooded by more loud stories, being smart means being responsible, trying to understand, listen and choose better, applying some critical thinking. Reading, then. Reading for the “simple pleasure of it”. In order to play a conscious role during this era of so-called “knowledge economy” distinguished by the extraordinary prevalence of digital culture and artificial intelligence (where algorithms require a deep understanding of the aims and consequences they might have, as well as technical knowledge – a job for engineers-cum-philosophers who possess a certain moral sensibility). Reading, in order to form one’s own individual opinion without falling into a pit full of curses, hateful shouting, racist and prejudiced slurs.

This, then, is the role that books play – books that defy the passing of time and trends, and the shabby polemics spread on social media and through blaring TV programmes.

“Not all our books will perish”, wistfully wished the emperor Hadrian in his Memoirs, which have been reassembled and narrated by Marguerite Yourcenar. The same Hadrian who said, “Founding libraries is like building public barns, piling up stock to tackle a winter of the spirit that, as several clues reveal, I fear will soon be here.”

Ours is a season full of complexities, and the arrival of an alarming “winter of the spirit” shows itself under many guises, with violence, sovereignism and racism besmirching what democracy, responsible and critical freedom, and a shared feeling of well-being have achieved. Yet, at the same time, this is also a season whereby public awareness – and especially the younger generations – centres on quality of life, environmental and social sustainability, the circular economy, solidarity and inclusion. Good books, the establishment of reading – i.e. thinking – habits, lead to turning points. Umberto Eco’s words come to mind, describing books as indispensable and perfect as a spoon or a bike, of which we can no longer do without.

Are Italian people finally getting the message? Are they learning its value at last? The Turin International Book Fair highlighted some interesting data. During the first nine months of 2021, turnover from book sales (both fiction and non-fiction) rose by 29% as compared to the same period last year, and by 16% as compared to 2019 (according to research undertaken by the Italian Publishers Association, in collaboration with Nielsen). The number of copies sold also increased, by 31% in 2020 and by 18% in 2019. In this light, we could say that the COVID-19 pandemic has had a positive impact: stuck at home, or, in any case, with a restricted choice of leisure activities (no theatres, concerts, cinema, sports), we turned our attention to books. Moreover, the decision to consider bookshops as essential shops, and keep them open, had a positive impact.

The number of Italian readers, however, has decreased: it now stands at 56%, as compared to 65% in 2019 and 59% in 2020. The figures, then, show an increase in “hard-core readers” (those who read at least ten books per year) or, at least, of people who appreciate a book from time to time.

The discrepancy is conspicuous: Italian people buy more books, yet just about one person out of two doesn’t read at all (one out of three before the pandemic). In the South of Italy and amongst the younger generation (between 15 to 17 years old) the situation gets worse, with numbers increasingly dwindling amongst those in possession of lower academic qualifications.

“We are facing a national emergency, even if the world of books is in good shape,” summarises Ricardo Franco Levi, president of the Italian Publishers Association.

Hence, we need to insist on reading policies, keep on supporting bookshops (especially the independent ones, very active during lockdown, providing valuable reading suggestions to those readers in need of some guidance), work hard to strengthen libraries, both public and private ones.

At the Turin International Book Fair, Patrizio Bianchi, minister of Public Education, declared a commitment to rebuild and consolidate the existing network of school libraries. Moreover, the corporate world is showing a growing interest in the propagation of company libraries, whose number was, up to now, limited to only a few cases (some popular ones, as readers of this blog will know, include the Pirelli libraries at the foundation’s headquarters in Milano Bicocca and at its factories in Settimo Torinese and Bollate – indeed, they were inaugurated in this period, mid-October, five years ago).

But we need to involve the younger generation, in order to build the readership of the future. As an example, the 18app has been a success: an app that gives 18-year-olds €500 to be spent in culturally enriching goods and activities – many used it to purchase books, including comic books. Initiatives aimed at fostering reading, such as those introduced by the most sensible teachers during the first years of elementary school, also have a significant impact: the large turnout at the Book Fair bears witness to this.

Literary awards also provide some incentive: the “Campiello Junior” initiative, for instance, recently launched by the Italian literary prize Premio Campiello with the Pirelli Foundation, a prize dedicated to fiction and poetry authors who write for young readers aged 10 to 14 years. A step in the right direction, as it nurtures “the pleasure of reading” while also spreading awareness on the educational role that good books can play in one’s individual – and later on, professional – growth.

“Having a well-stocked book shelf at home gives teenagers an advantage in life. Today, children who have at least eighty books at home show above-average linguistic, mathematical and technological skills.” This had already been suggested, three years ago, by a study published in the Social Science Research journal and involving 160,000 adults from 31 nationalities, whose data was collected as part of the OECD’s International Assessment of Adult Competencies. A perspective that’s becoming increasing topical indeed.