Science, theatre and digital humanism: popular culture as the driving force for development 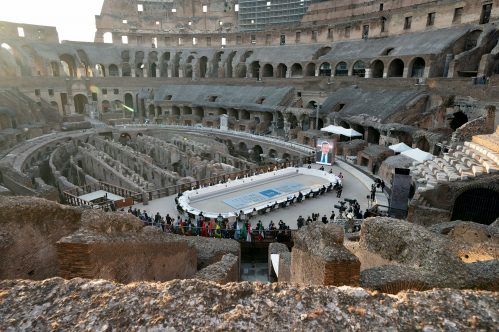 Culture as “the driving force for recovery and development. And, by promoting “ education and knowledge”, as a tool to make sustainable choices more effective, for the sake of a better future for the next generations. This is how, in the middle of the summer, Italian Prime Minister Mario Draghi opened the G20 Culture summit, held in the Colosseum amphitheatre in Rome, which provided an extraordinary backdrop for the discussion had by the Ministers of Culture of the biggest countries in the world. And the G20’s slogan, “People Planet Prosperity”, was interpreted to mean the value of beauty and environment, the rights against all forms of discrimination, and the beneficial relationships created between memory and future when safeguarding heritage and stimulating innovation. Indeed, prosperity in the post-Covid age.

The final document, unanimously approved, states that “cultural and creative sectors represent important economic drivers in their own right and are a significant source of jobs and income; and that they generate important spillovers to the wider economy, being drivers of innovation and sources of creative skills.” Recognising and enhancing their “social impact” in “supporting health and well-being, promoting social inclusion, gender equality and woman’s empowerment, local social capital, amplifying behavioural change and transformation towards more sustainable production and consumption practices” has therefore become key. Italy, according to Draghi and the Minister of Culture Dario Franceschini, is an exemplary “creative hub”. What we require now are “brave choices”, so that ideas can be put into practice, in order to conserve and develop “historical and cultural heritage” and turn it into a positive lever for economic and social growth. In fact, the guidance included in the Next Generation EU Recovery Plan runs along these same lines, and we are aligned with the political intentions of both the G20 and Europe in terms of public expenditure and the stimulation of private investments.

However, the talks of Draghi and Franceschini, as well as other contributions about culture we have heard and read about over the summer, draw the attention towards a particular point: the notion of a culture “for all” – accessible to all, understood by all. A real, genuine popular culture.

“Popular” as in open and communicative, far from being sloppy, vulgar or banal. “Popular” as in capable to blend “high” and “low”: symphonies and pop songs; great cinema – rife with narration and emotions (Billy Wilder, Sergio Leone…) – and the Italian comedy of Monicelli e Risi; highbrow literary prizes and readers’ awards – as with the Campiello literary prize –; sophisticated publishers and reckless writers; Picasso’s Dove of Peace and Banksy’s street art version of it; Quasimodo’s poem “Ed è subito sera” (“And suddenly it’s evening”) and Mina’s song “Città vuota” (“Empty city”); the performances and series broadcasted by Rai – true public service broadcasting from the 1950s and 1960s –; the interpretation of modernity according to sociologists and the philosophers adhering to Theodor W. Adorno’s Frankfurt School and Mariolino (Mario) Corso, Inter Milan’s left-footed footballer from the 1960s, commemorated in Il più mancino dei tiri (The greatest curve ball), a book by Edmondo Berselli, the extraordinary, sophisticated and ironic commentator of our troubled times (“Readers must sort themselves out, the public must gather information, make an effort, learn something…” he wrote in one of his best works, Venerati maestri (Venerable masters), to protest against the superficiality of slipshod opinions and the coarseness of commonplaces heightened by bad television and degraded social media).

Popular culture as in quality culture: incidentally, this is precisely one of the greatest legacies of the 20th century, which becomes apparent when re-reading the works of Walter Benjamin and Elias Canetti, Isaiah Berlin and Antonio Gramsci, Karl Popper and Thomas Mann, George Orwell and Virginia Woolf, Hannah Arendt and Simone Weil, Italo Calvino and Umberto Eco (just to mention a few names). When, that is, we browse through the shelves of a large imaginary library, and apply good memory and abundant inquisitiveness in order to discover, rediscover and finally reach, as in Jorge Luis Borges’s “The Aleph”, an entire civilisation, the roots of learnings that are both embedded and yet in evolution.

Popular culture as in the culture of beauty and research, paying attention to that “do, and do well” related to the best corporate culture, of which Italy is an excellent example; the synthesis of humanistic and scientific learning, the intersection of words and numbers, until we reach music, too, and recall Gustav Mahler’s words: “Tradition is not the worship of ashes, but the preservation of fire” – an open door ushering in innovation.

Nowadays, the evolution of digital technologies and artificial intelligence poses new cultural and civic challenges, leads to fresh knowledge development paths that are, however, also in danger to be muddled by “public debate” and stripped (through fake news, the drifting of misconceptions towards “magic thinking” and authoritarian shortcuts) of the wealth of ideas and values we hold as individuals and as a society.

Our commitment lies in knowing how to experience the new dimensions of knowledge as if they were opportunities for “digital humanism”, to use a term cherished by Luciano Floridi, professor of Philosophy and Ethics of Information at the University of Oxford. A term also used by Christian Greco, director of the Egyptian Museum of Turin, at the G20 Culture summit: “It’s time to introduce what can only be defined as digital humanism, in which archaeologists, anthropologists, architects, historians, philosophers, neuroscientists, psychologists work side by side with chemists, physicists, computer specialists, in order to attain the definition of new semantics that will allow us to understand and process the complexity of our reality.”

This is the key for the acceleration of the increasingly “popular” dimension of museums (corporate museums included, as the Museimpresa association has long been saying), whereby they have become sites of knowledge and dissemination combining in-person visits with digital viewings, the online and the on-site, the emotions felt in front of a painting by Caravaggio or Pollock and the background knowledge gained through digital tools.

The meeting of heritage and innovation is always on the horizon, as Greco timely reminds us: “At an international level, it’s now commonly understood that museums are theatres of memories where local and global identities are defined and different visions of the past and present meet the future.”

And here’s another key term, when talking about popular culture: theatre. Or, “the place where a community could freely gather and express itself, the place where a community can listen to words and either accept or reject them.” This is the definition of theatre according to Paolo Grassi, who, in 1947, with a then young Giorgio Strehler, founded the Piccolo Teatro di Milano following the model of “an art theatre for everyone” (as Salvatore Carrubba, its current president, recently reminded us in Il Sole24Ore). Its founders included cultural figures but also entrepreneurs (in the foundation deed we find the names of Piero and Giovanni Pirelli, Ferdinando Borletti, Giovanni Falck). And it all happened against the background of a city eager to rebuild itself after the devastation wreaked by the war and the dark years of fascism – a city able to boost its culture and use it as a lever for development, in line with the civic sensitivity of an educated and productive middle class that was open to, and mindful of, social values.

The experience gained from endeavours such as the Piccolo Teatro, but also the Teatro Franco Parenti or other art venues in Milan precisely exemplifies how great popular culture can be generated: by blending a tendency for innovation and a commitment to dissemination, experimentation with performing arts’ new forms and languages and care for the development of a widespread culture.

These are themes that are actually being pursued right now, as part of the initiatives launched – and supervised by the Piccolo Teatro’s new director, Claudio Longhi – to commemorate the centenary of Strehler’s birth (the Pirelli Foundation will also take active part, through a series of performances and debates on the themes of work, social transformation, scientific research and the relationship between freedom and innovation). Themes that also rekindle the issue of culture experienced not much as a succession of “events” but rather as a process of growth – the growth of knowledge and awareness of a community’s social and civic values. And, above all, the comprehension of the crucial importance inherent in narrating those values in an open, widespread, engaged and, indeed, popular manner.