The “beautiful factory” takes to the stage with the words of Eco and Buzzati, Munari and Sereni 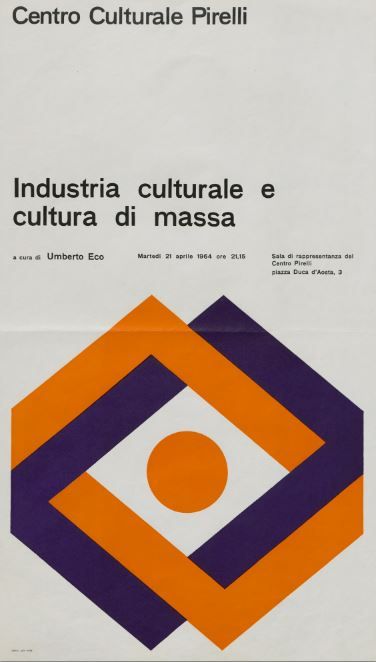 “The beautiful factory: culture, creativity, sustainability”. Five key words, in the title of the 15th Corporate Culture Week, organised by Confindustria and Museimpresa, from 10th until 24th November (a very long week, therefore, beyond the traditional time frame, also to emphasise the not solely symbolic, but also strategic long-term character of the event) which the Pirelli Foundation is taking part in, as usual, with original get-togethers, built around the notion that doing business, good business, is an essential part of “creating culture”: history, music, drama, literature, the environment, at the heart of commitment to liaise between the company and its stakeholders, starting with the youngest (the detailed schedule of initiatives can be found on these pages of the Pirelli Foundation, including the main event, the “Words of the factory: the “big names” in the historic “Rivista Pirelli” (Pirelli magazine) but also in the contemporary “Pirelli World”, Eco and Buzzati, Munari and Sinisgalli, Sereni and Javier Cercas, taken “to the stage”, next Friday, in the Pirelli auditorium, with the collaboration of the Parenti Theatre, by two outstanding actors, Sara Bertelà and Giuseppe Cederna).

Five key words, therefore. Factory, first and foremost. The production of quality, with high added value, which allows us to continue to be, despite everything, the second largest manufacturing country in Europe, after Germany, and to face the challenges of the demanding and competitive global markets (globalisation may encounter slow-downs and changes, in an era of neo-nationalisms and new protectionisms which have been confirmed by the Trump presidency, but no radical closures). So a “beautiful factory” in other words one that is well designed and planned (there are many now in Italy, starting with Pirelli in Settimo Torinese, with the touch of a great architect such as Renzo Piano), bright, transparent, welcoming, safe and secure (occupational safety is a vital aspect of this idea of “beauty”, according to the classic canons of “kalos kai agathos”), with a low environmental impact, renewable energy, full compliance with the criteria for environmental and social sustainability. And here is the third word, “sustainability”: a choice of basic values, in doing business, in opposition to the rapacity of speculative finance and in keeping with the balances, to be rebuilt and improved, between “building value for the shareholders” (making a profit, which is also indispensable for investments, innovation, growth, creating jobs) and having a role as a responsible social player in the development of a “fair economy”. How so?

The fourth key word provides the profound sense: creativity. Not just shapes and functionality of products, but design, “well-made beauty” as the distinguishing feature of the very best of what’s “made in Italy”. But everything that has to do with innovation, in the widest sense of the word: hi tech  and medium tech, products and productions, materials, languages, industrial relations, in the close relationship with research and the most sophisticated corporate services. An original tendency towards innovation, which is also indispensable in view of the need to tackle – for the Italian business (whether small or medium-sized, family-run from the onset, tied to the territories, inserted in networks and new dimensions of districts and metadistricts) – the digital challenges set by Industry 4.0.

It is indeed a culture choice (here is the fifth word). One in which the company plays the starring role. With this “corporate culture week” which condenses an undertaking which has been going on for years and continues beyond the dates of the event.

The future development of our country, in fact, by reinforcing the albeit fragile recovery under way, lies in the virtuous synergy between company and culture, between sophisticated and original creativity and manufacturing capacity which is able to take on the challenges of innovation. A “polytechnic culture”, naturally, an all-Italian inclination towards the syntheses between humanism and science, literary and artistic visions and technological skills, design culture and product culture. A genuine “industrial humanism”, to refer to the title of the exhibition organised four years ago by the Pirelli Foundation for that particular “corporate culture week”. It is an ability which has ancient roots, in the Renaissance but also an extraordinary force of contemporary nature. Which can be summed up by the acronym steam, which is so dear to Assolombarda and now widespread in the more general public debate (we have mentioned it multiple times in this blog): the initials for science, technology, engineering but also the environment, arts and manufacturing. Hence all the components, in fact, of innovation which drives economic growth, with a clear emphasis: the insistence on two letters, on the letter a of creative and humanistic cultures and the letter  m of manufacturing. Milan and Lombardy are its paradigm. Under the banner of a strong idea of competitiveness, tied to the greater and improved dissemination of the “economy of knowledge”.

Italian cultural industry, in all its components and for which Milan is in fact the essential benchmark, has top-level characteristics, to be an active and essential part of this process, to contribute towards the growth and the dissemination of the best corporate culture, towards the construction of a “great popular tale” of our manufacturing expertise and the excellence of the related services. In this sense too, “business is culture”. And, with culture, the company can conquer new spaces for competitiveness.

The road ahead includes two basic objectives: to grow, across the country, a greater awareness of the corporate values, of entrepreneurship, of the market and of merit; and to grow, within the companies themselves, the awareness of their own role, not just as fundamental economic players for growth, but also as social players, in other words as factors for cultural growth, social cohesion, participation. Besides, these are the new dimensions of corporate social responsibility, a point of commitment of particular value.