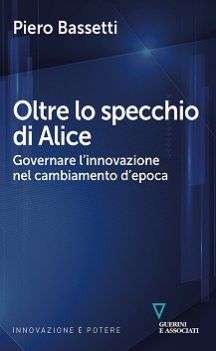 Piero Bassetti’s latest book carefully analyses current living conditions, setting out a new and stimulating idea on what we should do next.

Innovation as a force (including politically). The speed of senescence of other models of development, such as those related to decision-making algorithms, social media and life sciences. And then bewilderment at what is happening at present and the need to regain our capacity to plan “high”; The return of a culture of production that transforms into a culture of caring for others, for places and for society as a whole.  All this and more is contained within the latest book by Piero Bassetti, who has long been involved in the administration of public affairs, as well as being an economist and a key player in the overhaul of the chamber of commerce system.

In “Oltre lo specchio di Alice. Governare l’innovazione nel cambiamento d’epoca” (Through Alice’s looking glass – Managing innovation in an era of change), he takes the tale by Lewis Carroll as a starting point for his argument, explaining how in the wake of algorithms, the power of social media and the revolution in life sciences and quantum physics, we now hold in our hands a power that is devoid of potency. Like Alice, we have stepped through the looking glass, and now find ourselves in Wonderland. But here – of all places – the old tools for managing power, the worn-out reins, no longer work. Everything needs to be turned on its head and started anew, from the bottom to the top. But, the author argues, the question of who should be given the task of replacing these reins is one that cannot be avoided.

From Bassetti’s point of view, what has changed is innovation and so-called “glocalism”: two elements that institutions and all players aware of the change that is afoot must deal with, and which calls into question the ability to intervene.

Bassetti has written a book that is a delight to read, full of character and very up-to-date, although it is not always easy to understand it in depth. It is a book brimming with positive feelings towards the future, a future that we must grasp and develop. The title (and of course the content) of the last chapter, among others, is particularly wonderful: “Sfida all’horror vacui.  Armare la barca per il nuovo bordo”. (Challenging the horror of empty spaces – To love the boat for its new horizons).