What to do about Italy? 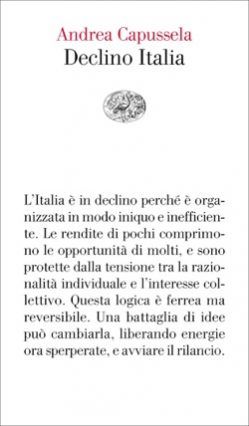 A country in decline that can recover. A virtuous path, with which it is possible (and necessary) to begin this recovery and in which institutions, businesses and citizens can play a new role. This is the positive message that comes out of “Declino Italia” (Italy’s decline) by Andrea Capussela, a recently published work of just over a hundred pages on the ills of Italy and how to solve them.

The gist of the thesis – the author writes from his own experience as an economist in the field and bases his work on a broader analysis of the country – is that Italy is in decline because it is organised in an inequitable and inefficient way. The introduction and first few pages of the book explain how the opportunities of the many are limited in favour of the income of a few, and how such incomes remain protected by the tension between individual rationality and collective interest. An iron yet reversible logic, that can be changed by re-establishing the foundations of civil coexistence based on trust, on expectations that can be met (including those of businesses) and on a freedom consisting of shared rules.

To provide some understanding of the situation Capussela starts by effectively summarising, in a few dozen pages, the path of the economic and political causes of Italy’s decline. This is a journey that lasted a quarter of a century and which appears to belong to another country altogether, not to the Italy whose economic and social structure allowed it to rise after the war and even give generate a boom. The author then explains that the country appears to be organised in a less equitable and efficient way than others: in particular, the rule of law and political accountability are weaker and this limits both corporate productivity and citizens’ opportunities. Under these conditions, a situation has arisen whereby the “defence of income” prevails over the search for economic development and inclusiveness, a situation that seems influenced by a force rising from the “tension between individual rationality and collective interest”. It is from this snapshot, however, that Capussela draws together the factors necessary for a relaunch, levers that can tangibly emerge from a battle of ideas, that can set “the civil energies and material resources currently being squandered” free.

Andrea Capussela’s book is not always an easy read, but it should nonetheless be read by all those who want to acquire a different perspective on the present. And, as always with books that make you think, while it is not necessary to fully agree with their authors, it is necessary to listen to them.