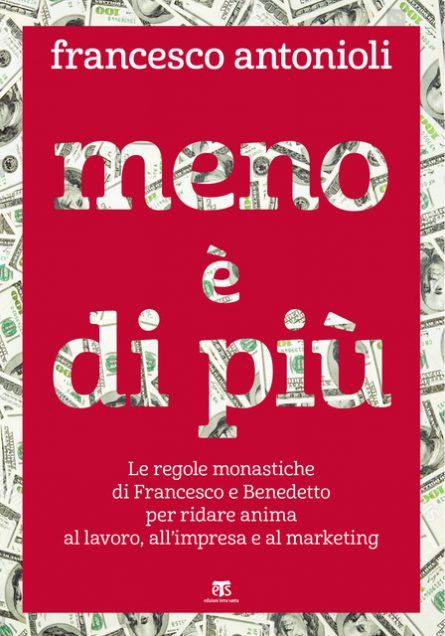 A look at a newly published book on the economy, and its future, based on the principles of Christian ethics

The company – the good company -, designed, built and managed from a different point of view. Guided, not by profit at any cost, but by ethics and in particular Christian ethics. Let’s be clear straight away, this company is not a religious business. But much more. What does this mean? Let’s look at “Less is more. The monastic Rules of Francesco and Benedetto to restore soul to the economy, finance, business and work”, by Francesco Antonioli.

Antonioli is an experienced journalist, and therefore a close observer of facts, but he also is a specialist in the connections (many and complex) that exist between the world of economics and that of ethics and spirituality. On first impressions his is an easy book to read, but this is only because it is well written,
in reality this is a complex work that requires careful reflection. The author’s central theme is the possibility of truly building an economy based on the great principles of Catholic Christianity. This does not mean there is no room for profit and efficient economic management of business. But it means something much more complex and the idea is fascinating.

Antonioli writes ““Less does not in any way mean decreasing. It means withdrawing, yes, from indifference, individualism, conflict and from the bulimia of consumerism and wealth. Actually it means to be more. More civilised, more fulfilled, more human and happier. Yes, less is more. You need creativity, and even a little madness, you need to be hungry for the future”. This is about greater modernity and, therefore, good corporate culture.

The book – as is evident – began with the The economy of Francesco initiative, when Pope Bergoglio called five hundred young economists and entrepreneurs under 35 to Assisi and invited them to write a “pact” to change the current economy and inject soul into tomorrow’s economy. Antonioli uses this event as the starting point for explaining his idea of what should be done. Which is a correction of the growth models that don’t guarantee respect for the environment, social equity, the dignity of workers, the rights of future generations. The basis of his work is the teachings of two charismatic saints, Francesco and Benedetto, who in their own way were inventors of financial prototypes and business organisation. He takes readers on a journey to find the answers to questions about how we can change the course of the economy, then moves to an analysis of the problems of the “other economy” (described as “sad and ineffective”), and then finally looks in more depth at the economy according to, firstly, St. Benedetto and then St. Francesco.

Those who see profit as the sole purpose of a company will not agree with Antonioli and neither will those who think the organisation of production is something to be based on the idea of doing good without any thought for efficiency. On the other hand, those who see the economy and businesses as living entities, made up of women and men who are entitled to dignity and respect, those who hope for this kind of production, will find Francesco Antonioli’s book an interesting read.

Less is more. The monastic Rules of Francesco and Benedetto to restore soul to the economy, finance, business and work