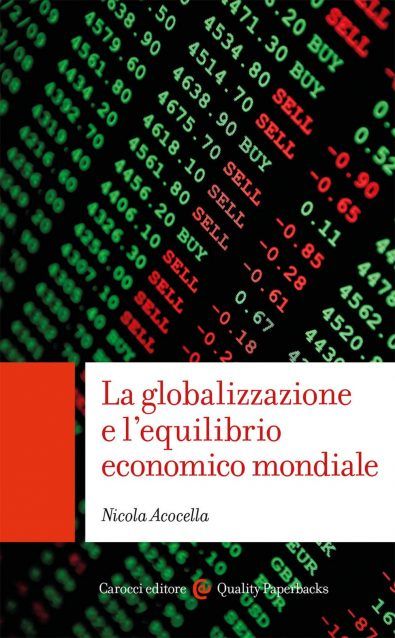 The story of the global world, its current state and potential future developments condensed into a single book

Accurate and reliable guides to navigating the complexities of today’s world, aimed not only at managers and entrepreneurs but at all of us. It is important to have access to useful information about what is happening and indeed what has happened in the past when it comes to attempting to shape what will happen in the future, which is why reading the latest literary work by economist and professor emeritus in economic policy at the Sapienza University of Rome Nicola Acocella could prove extremely worthwhile. Published in the midst of the Covid-19 pandemic, the book appears to seek to give readers a better understanding of what is happening.

La globalizzazione e l’equilibrio economico mondiale is a good handbook for navigating the many and varied aspects of globalisation based on the fundamental notion that we need to rethink not only the basics of globalisation and of the institutions, both private (especially multinational companies) and public (state-owned or international), that govern it, but also the effects of the current international order and potential future trends.

Acocella notably demonstrates how managing globalisation has significant implications of a purely political nature (localism and sovereignty to the point of the potential for political conflicts and wars) and where economic policy is concerned. With regard to the latter, the author compares the “well-tempered liberalism” conceived by John Maynard Keynes with what has been defined as the “savage” liberalism of recent decades, namely the economic policy that has led to financial crises and has, in recent years, been leading to various protectionist manifestations (notably including the conflict between the United States and China). There is also a useful glossary of terms and vocabulary explaining globalisation at the end of the book.

Acocella’s book is well worth a read, not least for its simple structure, whereby the first part looks at the various forms of globalisation, its causes and its effects, before the second part addresses the issue of the institutions responsible for managing globalisation and finally considers a third stage of globalisation understood as a series of changes caused by the prevalence of various players on the global stage.

What Nicola Acocella has written certainly achieves its aim of outlining a trajectory that has no end in sight. Undoubtedly well worth a read.