“Il Canto della Fabbrica”: A Book and a Concert to Celebrate the 10th Anniversary of the Pirelli Foundation 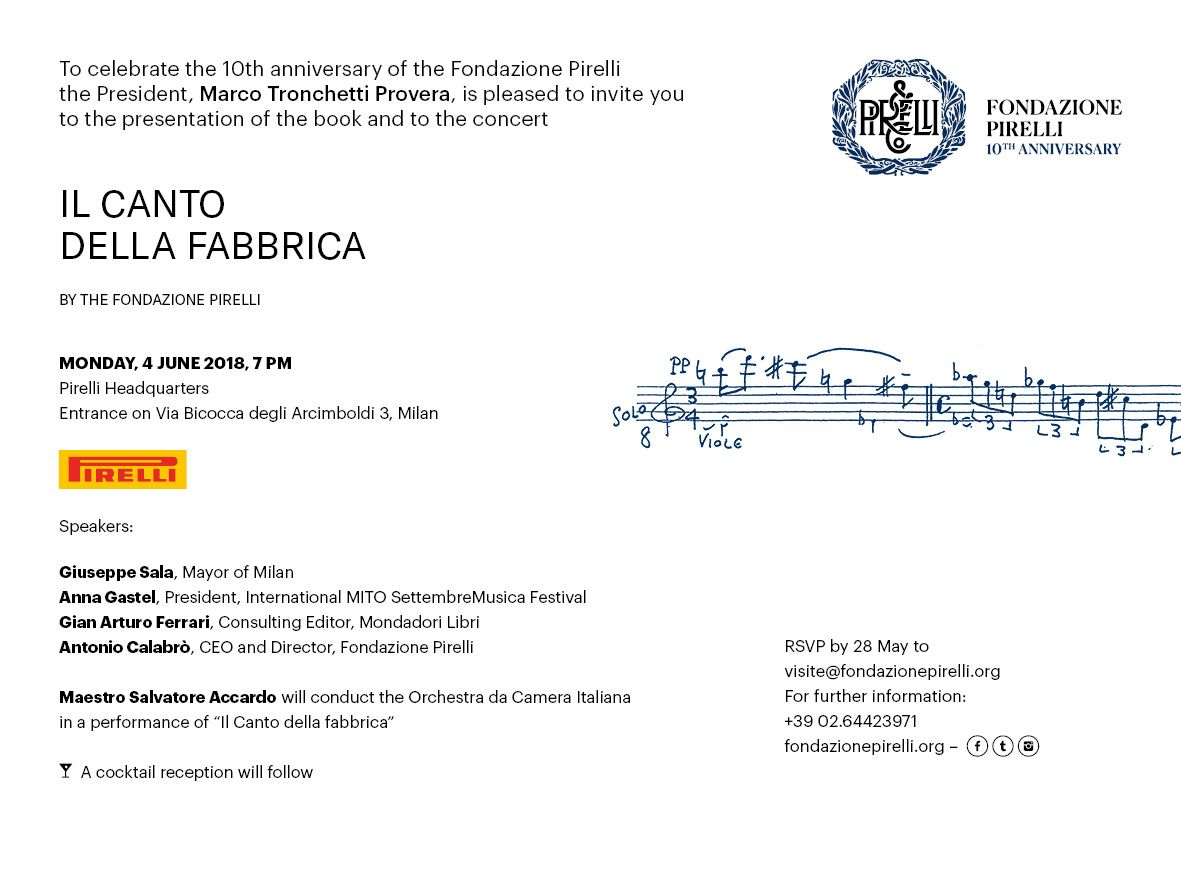 To celebrate this important anniversary, we are presenting Il Canto della Fabbrica, a book edited by the Pirelli Foundation and published by Mondadori, in bookshops from 29 May. The book reflects on how music too can be a starting point for narrating the present-day factory, and it does so through the voices of intellectuals, musicians, and industrialists. The title of the book is taken from “Il Canto della Fabbrica” a piece of music commissioned by the Pirelli Foundation from the composer Francesco Fiore for the violin of Maestro Salvatore Accardo, the world premiere of which was performed in the Pirelli Industrial Centre in Settimo Torinese during the MITO SettembreMusica Festival in 2017.

Just as the “four blasts from a factory siren” in Dmitri Shostakovich’s Second Symphony interpreted the factory of the early twentieth century – steel and noise, smoke, and the exhausting and fatigue of mass production – so Salvatore Accardo and the strings of the Orchestra da Camera Italiana convey the rhythms of digital manufacturing, with computers and robots in the 2000s, in “Il Canto della Fabbrica”. The 13 essays in the book have been penned by Marco Tronchetti Provera, President of the Pirelli Foundation, Antonio Calabrò, Director of the Pirelli Foundation, the architect Renzo Piano, the conductor of the Orchestra da Camera Italiana Salvatore Accardo, Maestro Francesco Fiore, and by the President of the International MITO SettembreMusica Festival Anna Gastel and Professors Piero Violante, Giuseppe Lupo, Domenico Siniscalco, Pier Luigi Sacco, Massimo Bergami, and Stefano Micelli. The volume contains over 120 illustrations from the Pirelli Historical Archive, showing the concert, the factory, and the way it has changed. A dedicated website, ilcantodellafabbrica.org, which can also be reached by QR code, has been set up to share and communicate the content of this project in the digital world.

The book will be presented on 4 June 2018 at 7 p.m. at the Pirelli Headquarters in Milan Bicocca, in the presence of Marco Tronchetti Provera, the Mayor of Milan Giuseppe Sala, General Manager of Libri Mondadori Gian Arturo Ferrari, and Anna Gastel and Antonio Calabrò. At the end of the presentation, the Orchestra da Camera Italiana, conducted by Maestro Salvatore Accardo, will perform “Il Canto della fabbrica”.

We look forward to seeing you!