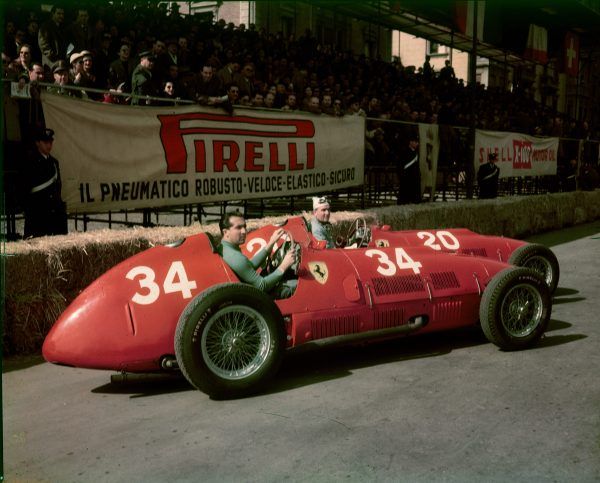 On 26 April 1955 the racing-car driver Alberto Ascari died in an accident on the Monza circuit. Or rather, “Our friend Alberto Ascari”, to quote the title of an article that Pirelli magazine devoted to him a month later. Ascari was the friend of the mechanics in the pits, the champion who after each victory would go up the stairs of the building in the Viale Abruzzi in Milan, Pirelli’s temporary post-war headquarters, too see his trusted technological partner. Ascari raced with Pirelli in Maseratis, Ferraris and Lancias, first with the Pirelli Stella Bianca tyre, and then with the Stelvio, which twice took him to the very top of the Formula 1 World Championship, in 1952 and 1953. With Pirelli he took on, and often won, the great classics, such as the Mille Miglia and the Nürburgring 1000 km.

His loyalty over the years to the Long P brand was yet another reason for his long friendship with the “maestro” Gigi Villoresi and it was something he had in common with his rival Juan Manuel Fangio. Alberto was known by many as “Ascarino” –  “little Ascari” – because he was the son of the great Antonio who passed away in 1925. But others, like Gianni Brera, called him “Ciccio” – “chubby” – for his not exactly slim physique. Some – for the same reason – even called him “The Breathing Mountain”. His wife Mietta confirmed this to the journalist Nino Nutrizio in an article on the repose of champions published in Pirelli magazine in 1951: “The mountain’s in there, sleeping and breathing. That’s a good sign, it means everything’s all right.”

Was Ascari superstitious? He probably was – like so many drivers who were constantly risking their lives at the time. The thirteen letters that formed his name, as well as that of his father, already troubled him. His father had died in an accident on 26 July 1925, during the French Grand Prix, so never would Alberto get behind the wheel of a car on the 26th of the month. And, especially, he would never race without his lucky blue helmet.

When his friends Villoresi and Castellotti invited him to Monza to see the brand new Ferrari 750 Sport that was to make its debut a few days later, Ascari was at home in Milan, just back from the Monaco Grand Prix, where he had come off the track and flown, together with his Lancia D50, into the waters of the harbour in the Principality. At Monza, however, Ascari just could not resist the temptation to try out the new Ferrari, even without his blue helmet, and even though it was Thursday 26 May. On the third lap, the Vialone corner proved fatal: it was said he had braked sharply so as not to hit an intruder who was crossing the track.
He would have turned 37 just over a month later, just like his father Alberto at the time of his death: he had been born in 1888, his son in 1918. Two men bound by a similar destiny and a premature end, but also by the enduring fame of being legendary champions.