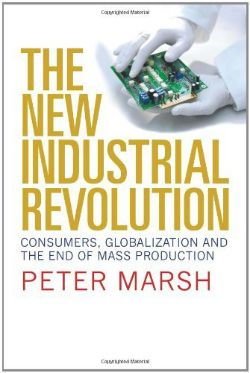 A new industrial revolution. This time not only described by a theory yet to be demonstrated but by facts and examples, from Toyota to Fiat via Ford, from the pin factory of Adam Smith up to Apple, a sustainable economy and that of energy. Peter Marsh, in his newly published The New Industrial Revolution, tells of the new (some would say fourth) industrial revolution, starting with an account of 250 years of industry and of innovations to reach a conclusion: the factories of the past, those located in a specific geographical place and closely linked to local history, are irremediably destined to disappear. It’s as if Marsh were saying that the future of the economies of the USA and Europe, and Russia and Japan, is at stake.

It’s quite clear that Marsh, journalist with the Financial Times, is very good. A flowing and attractive prose, a serried sequence of examples and the economic history of two and half centuries narrated like a novel make this non-fiction work a rite of passage for those seeking to gain a better understanding of the modern age.

One of Marsh’s theories is that, faced with the surge of new economies such as those of China and India, those based on traditional-style manufacturing now occupy a space destined to become increasingly tight. This is not a “simple” emerging of the typical production systems of areas geographically remote from ours, but the birth of new ways of tackling the market. Marsh goes over the features of the new technologies and of the production of custom-made goods, examines the effects of the participation by many more countries than before in the world economy and the growing importance of forms of sustainable production.

He then goes further. The new industrial revolution is recounted from multiple viewpoints and from two in particular: that of consumers, targeted by contemporary and multiple offers, and that of producers, forced to respond to previously unexpected opportunities in order to stay on markets that are larger and more complex each day. All this with an “old-time editor” language, capable of attracting attention with a story rather than with dry facts and figures.

Consumers, globalization and the end of mass production