How can cooperation improve production? 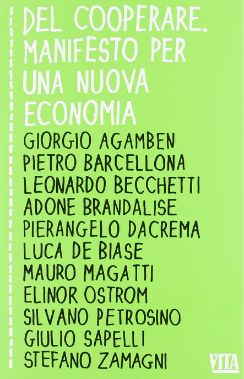 Eleven paths to achieve greater cooperation, to bring forth a different economy and production, to see business, markets, people and community in a new way. An experimental book, a breathless run through the labyrinths of economics guided by eleven different authors: economists, naturally, but also philosophers, jurists and literary scholars. “On Cooperation. Manifesto for a New Economy“, published by Feltrinelli along with Vita, magazine of the homonymous Italian non-profit, is all of this. But above all it is an attempt – largely successful – to open eleven optimistic windows onto a world that, to all appearances, has precious little to be optimistic about.

In just under 200 pages, the book attempts to respond to the question: what can we do to live together better? And it does so from every viewpoint, starting with economics – that is, the part of living together which, for better or worse, conditions most of the rest.

Each of the eleven chapters – one for each of the authors who participated in the undertaking – examine a particular aspect of economics: belief, the I, the We, the gift, generation, solidarity, the gesture, the remedy, cooperation (naturally), communication and “commons”. This is not a sentimental journey through the clouds, but an analysis conducted with different styles yet equal rigor that investigates the specifics of production, finance, currency and the market, all operating from the guiding premise stated in the Foreword: “Technical knowledge, by itself, is never enough. It’s not enough for people, nor for things, nor for their economy, nor the world. In this time of great disenchantment, there is a whole world out there to re-enchant”. By which re-enchant does not mean re-deceive, but quite the opposite – that is, find new reasons to look ahead, resolve problems, work together.

It is perhaps not by chance that the volume opens with a short essay on the economics of belief (wherein it is argued that one cannot move forward without faith – not the religious kind, but faith in the future), and concludes with a Nobel Prize winner explaining the economics of “commons”, or shared goods and resources that belong to everyone and have value for everyone.

On Cooperation. Manifesto for a New Economy