Looking to the future in 11 different ways 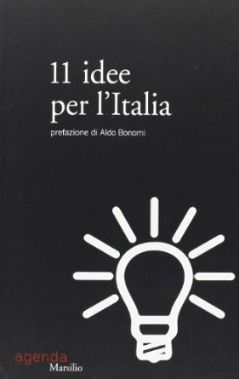 What do we have to do in order to move on? This is a question being asked with increasing frequency by businesses, organisations and the public at large, and one for which there is no single, simple answer, but rather an answer in multiple parts that includes both technical aspects and a culture of doing business and of living in today’s society.

What we need are tools to help us think differently, tools such as “11 idee per l’Italia” (11 ideas for Italy), which has recently been published by Marsilio and features a foreword by Aldo Bonomi, who writes, “For me, what you hold in your hand is, first and foremost, a collection of trails to the future.” Trails to be followed both by businesses and by the economy in general, all of which start from one observation: what we are dealing with is no mere crisis, but rather an historic division. It’s no longer enough to think in terms of mere growth, but rather of development (something which is much more complex and intriguing).

Venturing forth in this direction with ideas that could up to the task is a group of authors in a class by themselves (in the sense that they all have careers that go beyond just writing) offering up 11 proposals on as many issues, some unusual, in the realms of society and the economy. Take, for example, these ideas: to recycle unused warehouses and other industrial sites for cultural events (Mario Brunello); to test new models of housing in prisons while also giving inmates some extra education (Aldo Cibic); to shift from collective bargaining agreements to individual agreements between employer and employee (Gigi Copiello and Luca Vignaga); to take advantage of major events as drivers of economic development both locally and nationally (Roberto Daneo); to rationalise the actions of local government, along with examples of where this has already been done (Silvia Fattore); to rationalise the fashion industry in Italy to make it more efficient and cost effective (Maria Luisa Frisa); or to work towards greater financial efficiency for Italy’s museum network through better financial management (Guido Guerzoni). But the book also contains proposals on how to “save” Italian banks by tying them to the construction industry through social housing (Massimo Malvestio), how to better “promote” Italy by abandoning stereotypes and looking more towards the nation’s real production (Davide Rampello), how to reuse food waste and give rise to a new segment of manufacturing (Andrea Segrè), or, finally, how it would be possible for Italy to get back to conducting scientific research (Ester Zito).

What results is a dense, stimulating overview in no more than 140 pages showing what could be done to brighten Italy’s outlook on the future, from the economy to culture, from production and the territory to entrepreneurship applied in new and better ways.

In all of this, there is another important passage from Bonomi’s foreword where he speaks of the need to take a close look at the business leaders, at their difficulties and their demands for change, so that they themselves can change and become a new type of leader, one that is able to “take on the burden of transition”.