Reading and Pirelli: from the library of the 1920s to the brand new libraries of today 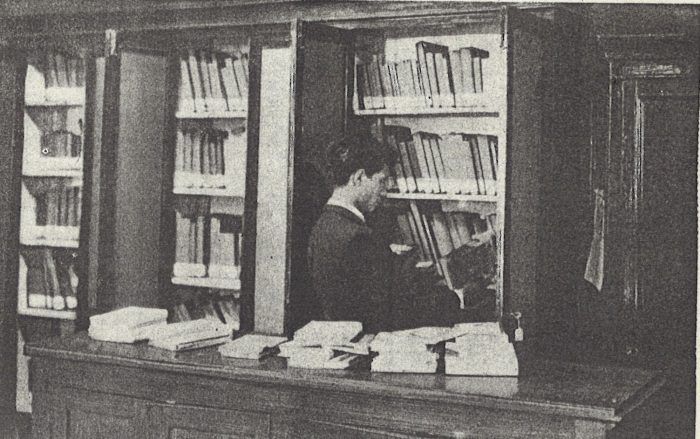 A document from 23 October 1928 conserved in our historical archive makes the first reference to a company library: it describes a travelling library available to staff who have signed up to “After Work for Pirelli Companies”, with 800 books and its own borrowing system. The “Firm, as well as supporting the costs of managing the library, will also contribute to its growth with an annual sum for the acquisition of new works”; book loans were for no longer than 20 days, with a maximum of two books to be borrowed at a time. In the next few years the library found a home at the Bicocca of the Arcimboldi before, after a period of closure during the war, it was reopened in October 1945 in a new location.The “Notiziario Pirelli” of 1 February 1946 referred to the opening of a “Section of our library at Milan-Brusada on the second floor of a building in G.B. Pirelli Road,” with the objective of “Increasing the amount of volumes with appropriate purchases in order to supply everybody with that powerful tool for recreation and education: the book.” .In 1946 there were approximately 3,000 books in the new library, chosen by the workers using catalogues provided by the company. The importance given by Pirelli to the spread of reading among its employees is further evident in the “Notiziaio Pirelli” in a piece titled “The Worker Does Not Read”: “You have to meet the worker after the trials and tribulations of the working day are over and try to improve his home life, creating in him the desire to extend himself beyond the world of the factory.” And it was with this in mind that the Pirelli Centre of Culture was created, from the initiative of the News Report Editorial Board.As Silvestro Severgnini, promoter of the Centre of Culture, relates in Culture is Like Bread (La cultura è come il pane) for the Pirelli Magazine in 1951, the centre was created with the aim of “Bringing together and coordinating the various initiatives, either already present or in the planning stage, and the educational framework relating to our firm, with the goal of raising the average cultural level of the workers.”  Among the activities of the centre were not only the “Pirelli library”, but also “factory meetings”, “the internal selection school”, musical and theatrical events, exhibitions, film festivals and conventions to which world famous writers and artists were invited, including Milan Kundera and Cesare Zavattini.

Over the next few years the library would grow to reach 10,000 books by 1956; in 1957 an entire page of “Facts and Information” was dedicated to the renovation of the library, which received a new space at 183 Sarca Avenue, where it stayed until 1972. The newest addition was a reading room dedicated to newspapers and magazines and browsing books directly from the shelves. Library loans rose to 50,000 units, a tangible sign of the interest reading held for many of the employees. In 1972 the company library was transferred from the “Creative Activities” building to building 120, still on Sarca Avenue, where it was provided with an information desk managed by the “Group for Social Activities.” Pirelli also made  a Technical-Scientific Library available for its researchers and engineers with around 16,000 books on tyre and cable technology from the nineteenth century until the present day.Since 2010 this library can be found at the Pirelli Foundation

Today, in line with this long tradition and in support of #ioleggoperchè (I read because), an initiative supported by the AIE (Italian Association of Publishers) to promote reading, Pirelli will soon open two new company libraries at the Milan Bicocca Headquarters and in the Bollate factory after the positive experience garnered from the Polo Industriale company library in Settimo Torinese, currently the only private library included in the SBAM (Library System of  the Turin Metropolitan Area). The contents of the three company libraries will be supplemented every year with new volumes, including literature books for children.

The same spirit which inspired the first travelling library in 1928 continues today with the opening of these new company libraries, creating a new meeting point where reading is the channel of communication, of exchange and of bringing people together. The writer Roberto Piumini dedicates a previously unpublished poem to the Premio Campiello Junior
Find out about the forthcoming events of the new literary prize
Countdown to the Final of the Premio Campiello 2021
The five finalists in conversation with the Pirelli Foundation
Premio Campiello Junior:
a new literary award born with the Pirelli Libraries
Load more
Grazie per la tua richiesta
Abbiamo preso in carico la tua richiesta, il team della Fondazione Pirelli ti contatterà per confermare la disponibilità.
Grazie per la tua richiesta
La prenotazione al momento non è disponibile.
Thank you! Registration was successful!
We have sent you an e-mail to the e-mail address you provided. Click on the link inside to confirm the registration.
Register
Already registered? click here
Warning! Check the correctness of the data entered.
Enter
Forgot password? click here
Warning! Check the correctness of the data entered.
Forgot password?