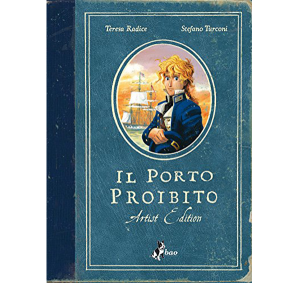 Accompanied by the verses of Lord Byron, Edgar Lee Masters, Robert Louis Stevenson, and Antonia Pozzi, we set sail on a romantic adventure, illustrated by the delicate drawings of Stefano Turconi and narrated as a nineteenth-century novel by Teresa Radice. The protagonist of this graphic novel is Abel, a mysterious boy who remembers nothing about his past except his first name. He is found off the coast of Siam by a Royal Navy ship and, once on board, he becomes friends with the first officer, who is standing in for the captain, who has run off after stealing the treasures that were on board. When he arrives in England, the young castaway finds lodgings in an inn run by the three daughters of the runaway captain, and he stays with them for a while, waiting to recover his memory. We are caught up in the deeds of sailors and pirates in this illustrated novel, with a wealth of literary references to the classics of literature and poetry. The soft pencil strokes create a surreal, immersive atmosphere, which plunges us into a story of love and of a mystery swallowed up by the sea.   Il porto proibito Teresa Radice; Stefano Turconi Bao Publishing, 2015