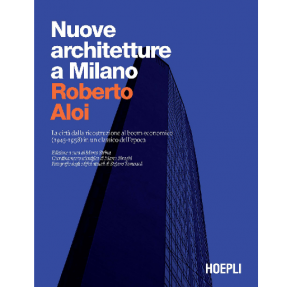 A selection of images from the vast photographic heritage of the Pirelli Foundation, which documents the design and construction of the Pirelli Tower and of some symbolic places in the city, has been brought together in Nuove Architetture a Milano, a new edition by Roberto Aloi of the 1958 book. The story is told in a series of entries, which are also accompanied by photographs of the Pirellone and the Pirelli canteen in Bicocca, taken by Giulio Minoletti between 1954 and 1956. Here we see the gigantic construction frenzy in Milan during the economic boom, when new buildings quickly changed the face of the city. In his introduction, Marco Biraghi explains how the book, which has entries illustrating more than 70 buildings, is an “eloquent document of an age in which an inseparable bond was formed between thinking-planning and acting-building”. The new edition, edited by Marco Strina, has been brought up to date, with the entries forming a sort of identity card of each building, thanks to the contribution of architects and architectural historians who describe the buildings as they are now.