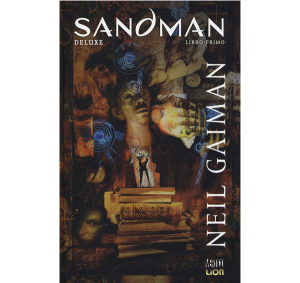 A shadowy tale in which Neil Gaiman’s visionary genius manages to blend mythological elements and literary quotations, creating a rich, complex world of fantasy. The character is inspired by northern European folklore, in which the Sandman is a spirit who sprinkles sand into the eyes of children at night to make them fall asleep. Gaiman takes a new look at this character, creating Dream (also called Morpheus), lord of the realm of dreams, who takes us into the most diverse historical and mythological settings: from the hills of England in the sixteenth century, where Shakespeare himself stages a particular version of his Midsummer Night’s Dream, to Milton’s underworld, through to present-day New York and back to ancient Greece. The style of his characters is inspired by 1980s rock and new wave musicians, such as The Cure and Bauhaus, creating a dark, dreamlike atmosphere like the shadows we see when waking from a strange dream: “Things need not have happened to be true. Tales and dreams are shadow truths.” The Sandman Neil Gaiman DC Comics, 1988-present