An early 20th century small calander in HQ: in memory of the machines of the past and current state of the industry 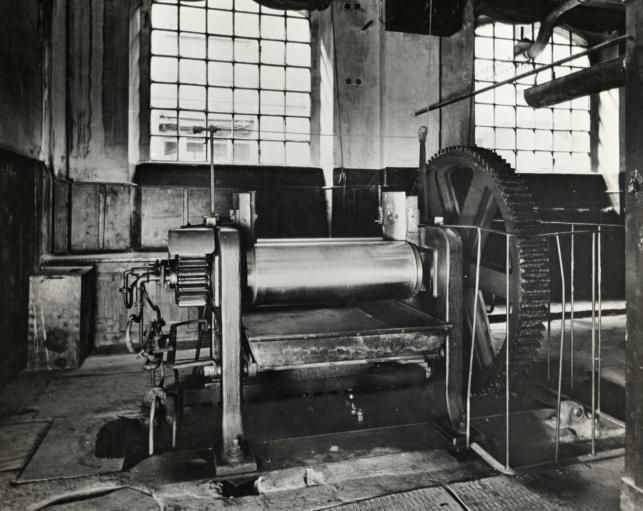 An early 20th century industrial machine, set against the glass, steel and cement of the offices in Pirelli’s ultra-modern headquarters. A mixer and a small calender a stone’s throw from high-tech screens, lab machinery and desks. Vestiges of a factory, in the contemporary space of a multinational industry. Not a monument but the memory of an extraordinarily contemporary culture. Pirelli has always been a factory at heart. Its strength, its wealth and its future all have factory origins. Even now, in times of great transformation, in which manufacturing is going digital, networks of robots and computers are playing key roles in production, labourers and technicians are mutating, skill-sets and responsibilities are increasing, and research and service labs are feeding into product structure in original ways. In times of Industry4.0 or digital manufacturing, as it’s also called these days. Factories they were and factories they remain, or neo-factories at the least. Transformed in an evolution that always lay in manufacturing’s future.

That’s why this machine is here, in the sweeping atrium of Pirelli’s Bicocca HQ, in front of the cooling tower, now an auditorium, meeting rooms and collective space, and just a few steps from the company library. It can be seen clearly from every office, all ten floors of them around three sides of the Tower, which has become an emblem for the changes taking place in Milan. It stands in this place as a reminder of the machine civilisation.  Not to mention the people tasked with operating them. A constantly innovative industrial and occupational culture.

The mixer-calender machine will be on display to the public on Saturday 4 March, as part of MuseoCity (a city-wide event involving museums, archives, heritage homes, workshops and artists, showcasing the role played in local culture and raising awareness of their outstanding cultural value) alongside a historical photograph: “Pirelli workers leaving the Via Ponte Seveso factory” by Luca Comerio, a photography and film-making pioneer. The work – staggeringly innovative for its time – is also of staggering proportions, measuring 245cm x 150cm and made using vanguard techniques. The Pirelli factory was innovative from its inception and innovative in its representation.  Moreover, it was located in a city at the forefront of early 20th century European-looking innovation in Italy (a characteristic which metropolitan Milan still conserves in its business fabric).

Let’s take a closer look at the machine to get a better idea (information gathered by Daniele Pirola, from the Pirelli Foundation historical archives and the keepers of the memory of the old Pirelli plant in Via Brescia, Settimo Torinese, namely the engineers who worked in the plant until it shut its doors in 2009/2010, after more than fifty years in operation, to hand over to the industrial facility designed by Renzo Piano.)

The machine is probably combines a mixer (two horizontal, forward-rotating cylinders), a calender (three vertical cylinders), and an assembly of components taken from other machines over the years.

One part came from an old Robinson mixer, like the one photographed in the Ponte Seveso plant in 1883. The date “1888” (although it could be “1883”) can be seen on one of the two vertical paddles that push the rubber towards the two horizontal and parallel rollers. The brand name is Farrel Foundry & Machinery, like the machinery photographed in the Mixing Room of the Bicocca plant in 1922.  Another nameplate on the right side of the machine bears the crest of the Kingdom of Italy and the words “Esonero (exempt) 24.12.1910”, possibly a tax certificate.

The left side of the machine is a small calender with three overlapping cylinders: the tubes which used to carry the hot water to heat them up are still clearly visible. A series of gears varied the distance between them while the toothed wheel was moved by the motor below it (inside the cage which is now empty). The nameplate here, bearing a star symbol and letters PCM (Pirelli & C. Milano), says that the machine was registered in the list of assets in 1933.  It was used for many years in Bicocca then moved to Settimo Torinese when the factory opened in 1954, for use as laboratory machinery given its small size. It remained at Settimo for many years. Until yesterday.

The industrial century, the 1900s, advanced alongside it. The memory remains.