Here are the figures from Milan, a dynamic and inclusive metropolis. An engine essential to Italian development 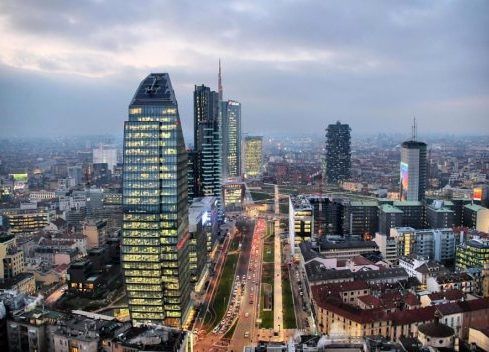 Milan, and within a hundred kilometres radius, Brescia and Bergamo, Monza, la Brianza and Lodi, hubs for competitive manufacturing. Then Como, Varese and Lecco, Pavia and Piacenza, Novara, with Ivrea and Turin just a little further away. A concentration of industrial areas, full of innovative companies and hi-tech services, research centres, first-class universities and international cultural initiatives. Just beyond the natural boundary created by the river Po, lie Parma, Modena and Bologna. To the north, the Brenner pass leads to Austria and Germany. To the east, from Verona to Padua and Treviso and on between Pordenone and the Friuli region in the direction of Central Europe. Milan is the focal point of a very European and simultaneously Mediterranean Italy, one of the most dynamic and productive areas of the EU.

According to a recent report from McKinsey, by 2025, 66% of the world’s population will produce two thirds of the world’s GDP in 600 global cities. And if, already, international competition no longer takes place between nations but rather between wide, well-connected metropolitan areas and “integrated territorial systems”, the “great Milan”, with its network of relationships and flows of people, ideas and businesses “within a hundred kilometre range”, has all that is needed to play a leading role. In terms of smart city, of circular and civic economy, and of that green new deal held dear by the EU Commission, too.

This is what was discussed at length at the Festival Città Impresa in Bergamo last weekend, organised at Kilometro Rosso (an extraordinary site blending research and industry) by ItalyPost, with the support of Assolombarda, Confindustria Bergamo and the Brescia Industrial Association. The event was attended by entrepreneurs, economists and political and cultural personalities. And here is the summary: the region under discussion has developed, even during those long years of crisis, much more than the national average, and at European speed. Companies have done a great deal, with their investments and innovations, but it is becoming increasingly urgent for government and political parties to start pulling their weight. For instance, with responsible and forward-looking choices for public investment in research, training and infrastructures, and with tax measures encouraging businesses growth and attracting international investments. Just the opposite of what has been happening in government chambers so far (and with only a few exceptions, such as the measures introduced by the former minister Calenda for Industry 4.0).

Milan has little to boast about. Yet it believes to be an engine in the service of Italy’s European development. Milan does not see itself as a “city-state”, like the archetype beloved by the political scientist Parag Khanna. Nor does it want to be perceived as unpleasant, arrogant in its achievements, or suffering from narcissistic self-obsession. Far from it. If anything, it recalls the edict of Bishop Aribert, who in 1018 proclaimed “Those who know what work is come to Milan. And those who come to Milan are free men.” Once again, Milan distinguishes itself as an attractive, open, curious, enterprising, well-disposed metropolis, agreeable to economic innovation and solidarity. “The city on the rise”, as Umberto Boccioni wittily described it at the beginning of the twentieth century, is back. With the handsome Porta Nuova and City Life skyscrapers in conversation with the “Pirellone” and the Velasca Tower, architectural masterpieces from the early sixties still crucially relevant today. The city, too, grows and expands, communicates and includes. A useful “platform” from which the whole of Italy can enter the global world, starting from the South. A pulling force towards inclusiveness, to paraphrase Carlo Bonomi, president of Assolombarda. Milan inspires envy, a feeling based on instrumental and provincial polemics (Milan drains resources from the whole of Italy without giving anything back), pitted by those who do not know how to interpret figures and projects. These opinions arise from a social climate that has nothing good to offer and the long standing reply from Milan and the Lombardy region is definitively worth its while: the constant development of the country’s engine, defining initiatives based on essential links between North and South. Milan is an open city, the connection between continental Europe and the Mediterranean, driven by innovative business. Positive examples are not in short supply: investments in the cutting-hedge avionics of General Electric in Cameri (Novara), Milan and, in the South, in Brindisi and Pomigliano: their plants are considered examples of international excellence; the programmes launched by Microsoft and Apple in Naples; the dense network of business relations between the Puglia, Basilicata and Lombardy regions in the fields of mechatronics and digital services. In Milan, a city vibrant with southern energy, it is clear that the country’s development must accommodate the balance and needs required by the South. Meanwhile, the South should not give in to provincialism, neo-Bourbon nostalgia, and easy populism. Indeed, Milan-Italy, as suggested by the name of one of the best RAI broadcasts from the nineties (when a well-governed Rai had a much better idea of its own responsibilities as a public service than nowadays).

Let’s consider some figures, collected by Osservatorio Milano, project supported by the Municipality and Assolombarda, now in its third edition. They were presented last Thursday at Palazzo Marino, in a debate open to the whole city: 244 indicators, with data processed by authoritative institutes co-ordinated by the Centro Studi Assolombarda, to discuss businesses and employment, savings, healthcare, schools, safety, social conditions, culture, education, etc. A reliable portrait of the city, built on competently collected and well analysed figures, a valuable experience in a time of nonsensical chatter. These are opinions devoid of political rejoinders from luminaries holding government positions, where knowledge is not scorned and science is not derided by ignorant demagogues (working with figures is essential to defend the merits of democracy).

What do these figures say? GDP growth in Milan between 2014 and 2018 was 9.7%, twice the national 4.6%. A GDP per capita of 49,000 Euros, compared to the national average of 26,000. A good result, which however includes a growing social imbalance: 9% of the Milanese population holds more than a third of the total wealth. Milan knows how to make money, but income distribution must be corrected and rebalanced. The Municipality, well governed by mayor Beppe Sala, has been aiming towards a social investment plan in the suburbs for some time. Another key social player, the Church, insists on the need to combine economic growth and inclusiveness, as always done throughout the history of Milan: “Blessed are you Milan, for the multicoloured faces of your people, for giving voice to those who have no voice and helping those who have no help,” says Archbishop Mario Delpini, promoter of a close dialogue between economic and social forces in the interest of inclusion and responsibility.

Some further figures. Milan welcomes 7.6 million tourists and has an 8 million quota at its fingertips (tourism is strong for different reasons: culture and shopping, but also business, health and wellbeing, training and conferences, making it a year-round destination). Milan is home to 4,600 of the 14,000 multinationals present in Italy. Milan is thirtieth in the world for foreign investments in the real estate sector (13 billion expected in the next decade, stimulated by the entrepreneurial and social dynamism of a European metropolis). Milan, with 32% of Italian patents and 27% of the most cited scientific research globally. Milan, with its local administration increasing the expenditure in social services from 409 to 414 millions between 2016 and 2018. Milan, enterprising and wearing its heart on its sleeve. Milan, “the place to be” as ingeniously defined by the New York Times at the time of the World Expo. But never self-congratulatory.

Milan is the cornerstone of the so-called New Industrial Triangle, between the Lombardy, Emilia and the North East regions, with a GDP of 782 billion Euros. If ranked among EU countries (ahead of the Netherlands, Sweden, Poland, Belgium and Austria ), it would be in sixth place; and it would be first among the richest and most industrialised regions (Ile de France, Rhineland-Westphalia, Bavaria or Greater London; data provided by the Edison Foundation). Moreover, Milan is a New Industrial Triangle, fourth among EU countries for manufacturing added value, first among competing regions, and always in the lead with regard to exports.

An extraordinary financial engine indeed. Although it is now beginning to suffer from the repercussions of severe international issues, from the global automotive crisis to the aftermath of the “trade wars” triggered by Trump’s America (industrial production stopped even in Brescia, despite years of steady growth).

In summary, Milan, the Lombardy region and the New Industrial Triangle combine into an engine that should not be stopped. Far from it. If anything, we should keep on considering it within the context of the interests and values of European Italy. As a long-term political and civic strategy supporting constructive and inclusive values.