Remembering Leonardo between genius and enterprise, to give new value to industrial humanism 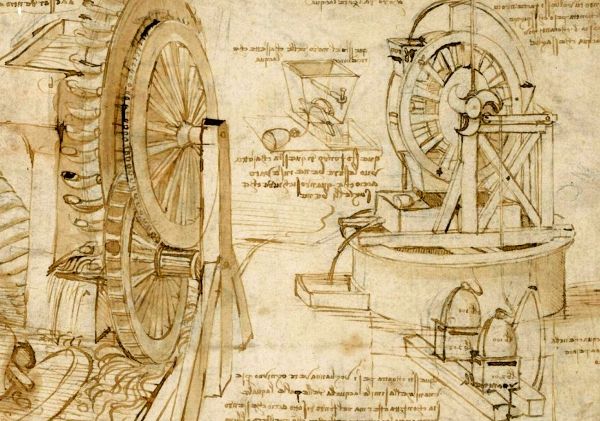 The gears, the wheels, the pulleys, the propellers. Water, fire, wind. Physics and chemistry. Machines and their movement, in Leonardo da Vinci’s drawings, represent a civilization of science and technology that still today needs to be considered and reconsidered, as the essential foundation of our original industrial humanism that, with wisdom, links memory and future and is a positive paradigm in the limelight of scientific thought and the international economy.In the great context of events, exhibitions and initiatives to commemorate and celebrate the five hundredth anniversary of the death of a genius of art and science, it is worth dwelling on one of Leonardo’s main attitudes: the fact that he was an extraordinary, visionary mechanic, as also testified by the drawings of the Codex Atlanticus kept in the Biblioteca Ambrosiana and now on display in Rome, at the Scuderie del Quirinale, for an exhibition with the evocative title, “Leonardo, science before science”: projects, machines and precious codes “to tell the story of an artist who, with his research, anticipated modern technologies”.”Genius & enterprise”, therefore. This is the name of the initiative organized by Assolombarda and Confindustria Firenze, on May 3, to talk about Leonardo and insist on innovation as an essential cornerstone of knowledge and development. The idea of the two presidents, Carlo Bonomi and Luigi Salvatori, is “to unite the capitals of Italian know-how”, through the entrepreneurial associations “that best express the Italian manufacturing that the world likes”, enhancing a figure like Leonardo who is “a model of strategic innovation able to stimulate the entrepreneurial culture”, a “symbol of planning”.Leonardo, in fact, is a “spirit of research” but also a constant aptitude to set in motion consequent production processes, governing the regime of the waters of the canals, building fortifications and war machines, designing objects and gears, working with workshop tools specially created. A mechanical genius, in fact. “Genio & impresa” is the combination that is repeated also for a research that Assolombarda has started in collaboration with the Leadership Design and Innovation Lab of Politecnico di Milano, to enhance the historical relationships between research and business (testimonial of some of the best Italian industries, such as Pirelli) and identify and give space to new realities in which innovation creates economic value and development. The basic idea is to take advantage of Leonardo’s inventive ability and his ability to represent and implement the transformation of invention into teak, which is currently effective and productive, to let the imagination run wild to find new solutions to the demands that came to him from customers fascinated by the new possibilities offered by contemporary science (such as Ludovico il Moro). Leonardo is the pinnacle of this. But there are also extraordinary examples of this in the laboratories, workshops and construction sites where Brunelleschi and Michelangelo lay the foundations for their extraordinary architectural and sculptural operations, in the colour workshops of Antonello da Messina, Raphael, Michelangelo and Titian as chemical factories and in the foundries of engravers such as Cellini. Our “knowing how to do beautiful things that the world likes”, to use the essential definition of a great European historian of economics, Carlo Maria Cipolla, has its roots in this “polytechnic culture” that feeds on science, taste, beauty. And even today, Italian industrial skills, in mechanics and mechatronics, rubber, chemistry and pharmaceuticals, in the traditional sectors of Made in Italy such as clothing, furniture and agribusiness, but also in worlds such as automotive, avionics and shipbuilding are strongly marked by a competitiveness that has historical roots in manufacturing areas and cultural antennas sensitive to the changes and innovations of the most unscrupulous creativity and passion for research and innovative technology. And to his proactive spirit. Luigi Salvadori insists: “Our alliance, between Assolombarda and Confindustria Firenze, is intended as an appeal to Italy to push on the attraction of talent, to become a society open to innovation and modernity.