The Mafia is the enemy of companies and of the market, as also testified by ten stories at the theatre 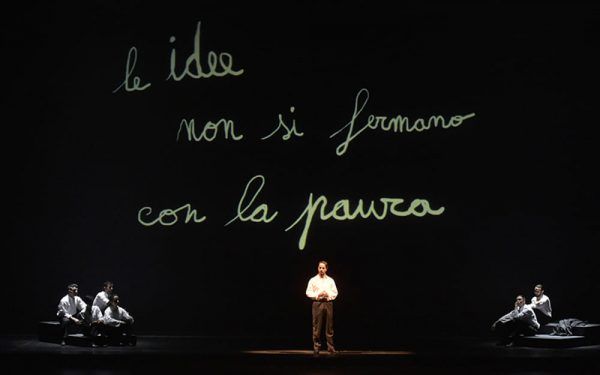 People can also fight the Mafia by going to the theatre. And by going to the theatre precisely there, in Brianza, where the families of the ‘ndrangheta put down roots a long time ago, doing business, devastating the land and public administration, corrupting and trampling over politicians and entrepreneurs. At the theatre, to involve spectators in “Dicei storie proprio così” (Ten stories just so), brought to the stage by Giulia Minoli and Emanuela Giordano (who is also the director), first at the Piccolo Teatro in Milan and, last night at Teatro San Rocco in Seregno, the heart of Brianza, precisely the land of innovative enterprises but also of Mafia trafficking, documented not only by judicial inquiries and court sentences but also by an up-to-date research commissioned by Assolombarda and conducted by Mattia Maestri for the Cross, the Observatory on organised crime of the University of Milan, directed by professor Nando Dalla Chiesa (Wednesday morning, the performance will be dedicated to an audience of students, prepared through a series of meetings in schools). The initiative has the active support of Assolombarda, which has been engaged at length in protecting good businesses and promoting market culture, in its deeply-rooted conviction that legality is an essential factor in competitiveness and that the Mafias are enemies of the market, an obstacle to economic growth.The Anti-Mafia theatre is not an event, therefore.But rather a step in a long journey of legality, involving social and economic players, schools, people from the institutions.A strategic choice of civility.

Legality, the economy, quality of institutions are the topics that had the most resonance during the “Stati generali contro le mafie” (General states against the Mafias), organised specifically in Milan by the Ministry of Justice and by the Municipality on 23rd and 24th, with the presence of the President of the Republic Sergio Mattarella and with the participation of Ministers, magistrates, exponents of law and order, economists, businessmen and scholars. A commitment against corruption, “a theft of democracy”, to use the effective expression of President Mattarella and a door into public administration opened for Mafia bosses, but also a phenomenon that, dangerously widespread, should not be confused outright with the Mafia. An assumption of responsibility against Mafia infiltration in politics. And insistence on economic issues.

The Mafia clans move seamlessly in contexts of shady finance, they occupy international tax havens, they launder the proceeds of illegal businesses, they corrupt financial and economic circuits (the Ministry of the Economy and Banca d’Italia are aware of the danger posed by these transactions). They find great deals in the opportunities offered by the “digital” world to shift money (“There will be a Totò Riina with IT skills,” says Alessandro Pansa, general manager of the Department of Information for security, the coordination of the “Secret Services”). And they must be fought using international agreements involving the coordination between supervisory authorities, magistracies, police forces. But repression, albeit essential, is not everything. Political commitments, as well as social and cultural ones, are necessary.

“A pact for legality with companies”, proposes the Italian Home Secretary Marco Minniti (“IlSole24Ore”, 25 November), a revitalisation and a revival of the Protocol of Legality signed between the Interior Ministry and Confindustria in 2010. It is a prospect that Assolombarda fully agrees with. Minniti insists: “The economic world must be aware that the Mafia economy pollutes and distorts and therefore must make up a critical mass with the institutions to defend legality. Mine is an appeal to all the associations and in particular to Confindustria”. It is an important appeal, to be welcomed and implemented, even and most of all on the territories where the Mafias have evolved to dangerous levels for some time. Such as Lombardy and Milan, rich and attractive areas, also for capitals of illicit origin, for criminal activities.

“Market Mafia”, some magistrates call it, “a Mafia that no longer shoots people but that has converted to the logic of the market”. An accurate statement, if it refers to drugs, to human trafficking, to “services” such as the disposal of toxic waste or to the prostitution and cocaine “ring”. But “market” is perhaps the wrong word: because “market” is word of value, it refers to competition, to rules, comparison, transparency, lawful activities by companies, fair exchanges. Cosa Nostra, ‘ndrangheta, Camorra are instead shadows, lawlessness, dirty deals, use of violence to beat the competition. It is not a question of terminology, but of the substance of the values of the economy. Market and Mafia, in short, are on different sides of civil society. Indeed, on opposite sides. The Mafia is an enemy of the market. With the Mafia, the market does not grow, but instead dies.

It is precisely in this awareness that lies the choice made some years back by Assolombarda for legality as the backbone of corporate culture, and which has been reconfirmed over time. Entrepreneurs have been told repeatedly: the Mafia is not a service agency to solve problems of permit granting, or credit recovery, to be awarded a contract, to beat a competitor, to evade tax with false invoices, to overcome a corporate or trade union obstacle. The relationship with a Mafia clan seems to be an easy shortcut, but it ruins a company forever. And the other companies are consequently damaged. In short, the Mafia is a tumour, a poison. To be avoided. And fought.

The choice of civil theatre and the involvement of schools, in the “microcosm” of Monza, is a step in this virtuous direction. The strengthening in Milan of relations between Assolombarda and the Courthouse, the institutions, law and order, is the cornerstone of the commitment for legality and competitiveness. The stimuli for better corporate and market culture are essential. The “Mafia deals” are not only barbaric but also a very bad deal for the Lombardy of good businesses.