How teamwork leads to learning and succeeding 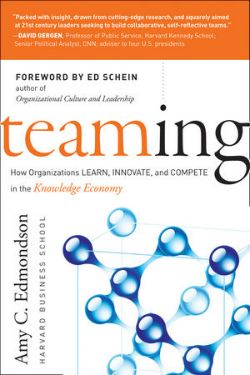 The age of the “small is beautiful” philosophy has ended yet the concept definitely has some useful meaning, even in large industrial companies. All it takes is to apply this thinking with moderation and learn from practice and observation. Starting, as Amy C. Edmondson (Harvard Business School) does for example, with a series of empirical investigations in different areas: from Toyota to GM, from the US health service to the IRS, via the failures of “ventures” such as the mission impossible to save the Chilean miners to the space shuttle Columbia tragedy.

Her “Teaming. How Organizations Learn, Innovate, and Compete in the Knowledge Economy” demonstrates that organisations prosper, or do not succeed in prospering, according to how well small groups work within them and among them. This is not a cliché but instead a working guideline which is often difficult to put into practice, because groups, the teams which make up every organisation, do not learn naturally to work in a team.

The book however is written by an American lecturer in management, practical and grounded, also taking into consideration those who have to manage groups and make them work with each other. The book thus contains a clear explanation of how individual and organisational psychology, the hierarchical set-up and cultural differences can prevent corporate success. It also includes important concepts to be “digested” in daily corporate management situations. According to Edmondson, for example, conflict and failure are needed in order to maximise learning. For this reason the book describes the factors that prevent effective collaboration in work environments, such as lack of interpersonal confidence, irrational fears about failure, so-called “group thinking”, the dynamics of power among individuals and the obtaining of information. The information gleaned throughout the book is that leaders can make up for the shortcomings through the understanding of the existence of these obstacles, also modifying their style of leadership in order to sustain and facilitate group work.

However one of the most significant parts of the entire book explains that the currency of the future is the ability to generate ideas in order to solve problems and that teaming is the way to develop, implement and improve those ideas.

How Organizations Learn, Innovate, and Compete in the Knowledge Economy