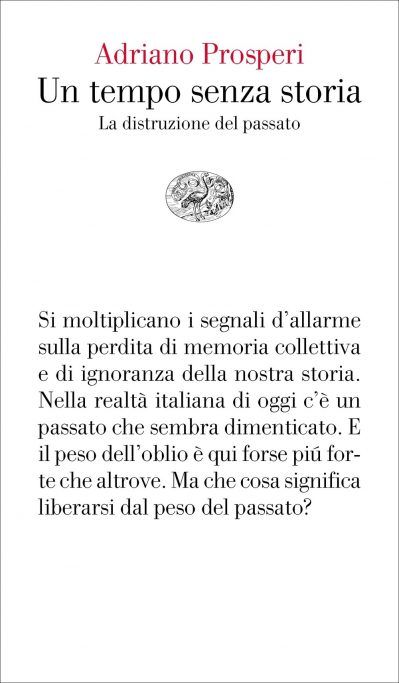 A small book by a great historian, this volume helps to improve the reader’s understanding of the current age in which we live and work

Good culture, and good business culture in particular, is nourished by an awareness of the present, but also of the past. This is an observation that should be taken on board, but which in reality is often pushed aside in favour of the easy appeal of the immediate. Reading this short book of just over a hundred pages by Adriano Prosperi – a distinguished historian and now Professor Emeritus of modern history at the Scuola Normale Superiore in Pisa – entitled “Un tempo senza storia. La distruzione del passato” (A time without history. The destruction of the past) serves to strengthen this awareness, which renders culture (business culture included) an irreplaceable condition for action.

Prosperi’s intention was to write a book that is both a defence of history and a concerned examination of the society of oblivion in which we live. Drawing from his lengthy experience, the author comments on the condition of a society in which history, as a discipline, is belittled and marginalised, and where forgetting the past is a phenomenon linked to the disappearance of the future from the perspective of new generations, while the re-emergence of Nazi-esque mythologies is linked to a hatred of those who come “from outside”.

Past and present, along with the role of memory and history, but also the civil commitment of individuals and organisations, are the themes at the heart of Prosperi’s analysis, which describes the disturbing state of our society. A society in which individuals move and live, and where production organisations and markets take shape and spring into action, as well as where public opinion and political movements that seem to favour exclusion over welcome gain momentum. The pages of this book paint a picture of a society in which positive visions that are linked – for example – to corporate social responsibility, the protection of others and safeguarding the environment, appear to be in danger of being pushed aside on the long road of history.

Prosperi writes in a dense, passionate manner, and his work is not always an easy read. And yet reading “Un tempo senza storia” is worthwhile for us all,it can help us to look at both the past and the present in the way we should, and move into the future with a firm, decisive stride.

Un tempo senza storia. La distruzione del passato (A time without history. The destruction of the past)