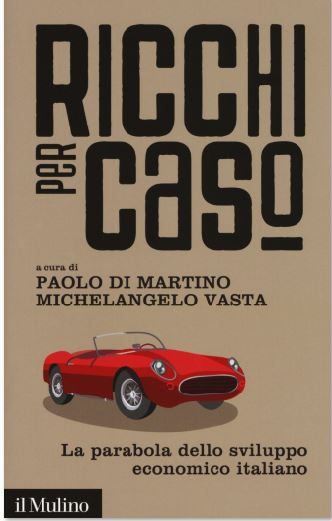 Institutions and enterprises. The links are there, and they are evident. We must analyse them and understand them to find out which paths are set out before companies and, meanwhile, what the institutions have to do always to provide a useful background for growth.  Analysis and assessment, therefore, not only of the present day but also (perhaps in some cases especially) of the past. An analysis that must be accomplished with a focus also by those who take care of the company.

“Ricchi per caso. La parabola dello sviluppo economico italiano” (Rich by chance. The parable of Italian economic development) is one of those books which might help accomplish what we just mentioned. Between the historical and the economic and social analyses, the volume was written by several hands but edited by Paolo Di Martino (senior lecturer of International Business History at the University of Birmingham) and Michelangelo Vasta (Professor of Economic History at the University of Siena) and it covers a path that is clearly marked from the onset. In the last century and a half since Italian unification, according to the authors, Italy reached levels of wealth similar to those of the major industrialised countries. Then everything suddenly stopped.  The wave of globalisation in recent decades has however revealed the weakness of our manufacturing system. According to those who composed the book, there is one condition at the heart of what has happened: Italian capitalism has been negatively affected by inefficient institutions, which have had a strong impact on the size and  governance of companies, as well as on the education of human capital and on innovative capacity. And it is precisely from there (human capital, innovation, businesses) that it is necessary to start again.

The book has a simple structure. The first chapter explains the historical evolution of the Italian economy, the second and the third analyse the institutions from a the point of view of education and research activities.  The subsequent chapters look at the rest of the institutions to pinpoint where we should start, to give the country a future.

What the group of researchers coordinated by Di Martino and Vasta has written provides a certainly pessimistic view of Italy’s past and present. “Rich by accident”, precisely. It is clear that this is an interpretation which you may not agree with (in whole or in part), and it is also clear how some elements of the picture taken of Italy are left in the shade or blurred. But certainly what Di Martino and Vasta have coordinated boasts two great advantages: it is clear to read and it presents the reasoning that should be considered with great attention and seriousness. There are some beautiful and useful quotes placed at the beginning of each chapter from Gramsci to Wilde, as well as Eliot, Tocqueville, Mastronardi, Lewis and even from “La grande bellezza” (The great beauty).