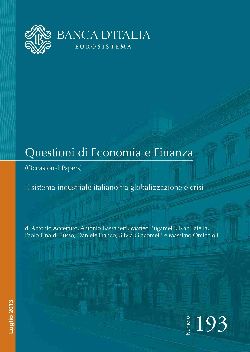 Italy’s industry is losing competitiveness and production levels in all sectors are lower than those prior to the recession. With the exception of food and pharmaceuticals the scale of the loss of production is now worrying. Alongside the effects of the economic situation there is also the historic decline in textiles and footwear and also those of key sectors such as electronics and cars. Against this type of background, which undermines the foundations of the actual business culture in Italy, a single question arose some time ago: what can be done?

Among the answers special account is to be taken of that which comes from a group of eight researchers from Banca d’Italia who in a newly published study on the evolution of the Italian industrial system propose three lines of action in order to attempt to raise the fortunes of the Italian production system.

Antonio Accetturo, Antonio Bassanetti, Matteo Bugamelli, Ivan Faiella, Paolo Finaldi Russo, Daniele Franco, Silvia Giacomelli and Massimo Omiccioli, in their Il sistema industriale italiano tra globalizzazione e crisi [“The Italian industrial system – globalisation and crisis”], start from a basic observation: in 2012 industry produced 257 billion of added value, employed 4.7 million people, is a “fundamental source of innovation and competitiveness” (with over 70% of expenditure on research and development in the private sector) and has “a decisive role in balancing accounts with other countries”. Therefore we cannot stand by and watch.

This led to proposals. First of all to make a selection, i.e. act on the mechanisms of allocation of resources from less productive companies and sectors to the more productive ones, from manufacturing where the competitive pressure from developing countries is not sustainable to other more advanced and complex ones. A task which involves a review of the system of social buffers and active labour policies, the review of the capacities of the financial system and the overhaul of corporate taxation. Secondly the costs sustained by Italian companies should be reduced (energy, bureaucracy, infrastructure and public services are the main culprits). Thirdly, industrial policies have to be made less invasive and fragmentary, which means in fact targeting actions better, staking on a growth in size, on R&D and also on restructuring of public activity of support for internationalisation.

Of course these are proposals condensed into 70 pages of reasoning, figures and graphs, but they are clear ideas. That which is needed in order to start to understand more.