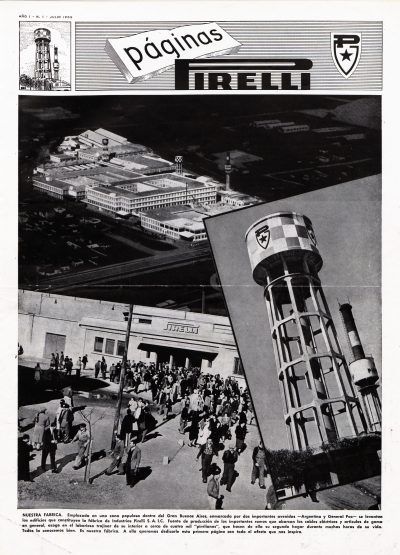 148 years have gone by since 28 January 1872 when, in the presence of the Milanese notary public Stefano Allocchio, the twenty-three-year-old engineer Giovanni Battista Pirelli signed the Articles of Association of the first Italian company to manufacture items in rubber. This marked the birth of Pirelli in Milan, during an Industrial Revolution that was leading Italy towards the twentieth century and, for this all-Italian company, that was opening up a world of internationalisation.

And indeed, the first Pirelli factory abroad was opened in Spain in 1902. Then came England, a few years later, by the sea in Southampton. Now it was time for the “great leap” over the ocean, towards the Americas and the opportunities they promised. Pirelli y C.ia – Sucursal Argentina opened in Buenos Aires on 1 January 1911: the great success that Italian rubber had enjoyed just a few months before the International Exhibition of Railways and Land Transport, which had been held in the city to celebrate the Centenary of the Argentine Republic, had prompted the Pirelli Group to open a commercial branch in South America. A few years later, in 1917, production work got under way.

Today, with the publication of the Pàginas Pirelli house organ of Pirelli Argentina, which was launched in 1955, we are also celebrating the one hundred and forty-eighth birthday of the Group. When Pàginas Pirelli magazine was first published, just five years after the Italian house organ Fatti e Notizie, the Argentine subsidiary was expanding at its fastest rate. Already firmly established in the rubber cable and products sector, with two Pirelli Saic-Sociedad Anonima Industrial y Comercial factories in the Buenos Aires area, Pirelli Argentina was also starting up local production of tyres. In 1951, Coplan-Compañia Platense de Naumàticos, a joint venture with the American U.S. Rubber, made its first tyre at the plant in Merlo, 30 kilometres from Buenos Aires.

In 1968 Coplan was taken over in its entirety by Saic, and the Cinturato tyre went into production in South America: it was no coincidence that one of the banners chosen in 1968 by the designer Pino Tovaglia for the Pirelli Cinturato advertising campaign bore the colours of the Argentine flag, together with the slogan: “en Argentina se dice Cinturato”.

Leafing through the pages of this magazine recalls the image of a company – Pirelli – that was well aware of its global reach: between the lines and in the illustrations in Pàginas we find a “piece of Italy” across the ocean. One that is still part of a company that is Milanese and, at the same time, international. Now celebrating its 148th year.