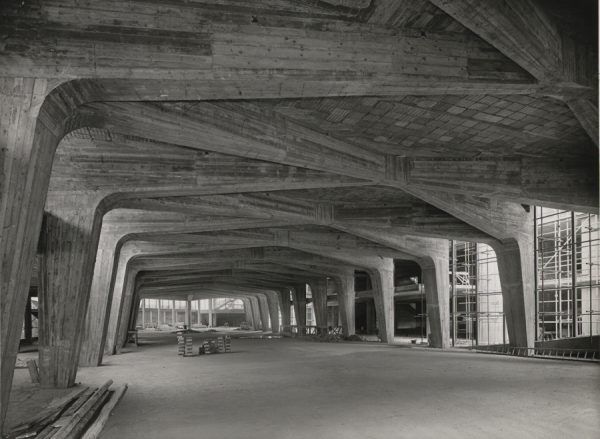 The first Pirelli factory in Via Fabio Filzi was severely damaged by bombing in the summer of 1943. When the war was over, the reconstruction began and the company decided it needed a new administration centre. There were two options: they could either rearrange the headquarters in Viale Abruzzi, to which the offices had been relocated after the bombing, or they could construct a new building in the Brusada area between Via Fabio Filzi and Piazza Duca d’Aosta. Despite the fact that the Brusada option would cost more and the area available was decidedly smaller, other factors came into play when making the decision. Alberto Pirelli’s idea was to create a building with great personality, in an area that was of great symbolic value for the company: from the rubble of the historic factory would rise a tower that would be the tallest building in all Milan. As the papers in our Historical Archive relate, the Pirelli engineers Alberti and Loria, together with Giuseppe Valtolina, a consultant, were entrusted in 1950 with the preliminary phase of the project and, in 1952, the architect Gio Ponti was also brought in.

Ponti was known not only in Italy but also abroad and he had already designed important administration complexes, such as the one for Montecatini, also in Milan. The company’s choice of such a prestigious architect reflected the decidedly promotional nature that was a feature of the project right from the start. The tower, which was referred to by the British architectural critic Reyner Banham in 1961 as a perfect example of advertising architecture, was indeed a powerful means of promoting Pirelli’s image as a future-oriented company that was modern, progressive and internationalist, with a quintessentially Milanese spirit. It was the subject of a communication campaign that, in terms of extent and duration, was unparalleled even by the most eminent skyscrapers in New York, as Banham put it. This can be seen in a number of articles published by Edilizia Moderna, Domus, and Pirelli magazine, both before and during construction of the building, and also in many institutional advertisements that showed Pirelli products with views of the tower throughout the 1960s. In 1953, the Valtolina-Dell’Orto and Ponti-Fornaroli-Rosselli firms were commissioned to draft the executive plan, to oversee the works and to perform testing operations on the building. The final construction plans were ready at the end of 1954: a 127-metre, 31-storey reinforced concrete tower, with a broad ground plan in the middle gradually tapering at the ends until it almost closed at the tips. With the intervention of the engineers Pier Luigi Nervi and Arturo Danusso, who were called upon to design the reinforced concrete structure, the design was completed in 1956. The first stone of the skyscraper was officially laid on 12 July 1956 and from then on, the growth of the building, day after day, floor after floor, symbolised the pace at which Pirelli, Milan, and the whole country were developing in these years of the economic boom. It was an extraordinary construction site, adopting solutions that had never been tried before.

Every phase of the construction work, from the demolition of the Brusada to the completion of the tower, is documented in over 230 images now on our website. The photos were taken by Giorgio Calcagni, the photographer of Pirelli’s “Direzione Propaganda”, but also by the Publifoto agency and by well-known photographers such as Aldo Ballo and Giancarlo Scalfati. More photographs are now being added to those of the construction process in the online archive: over 390 pictures of the completed building and about 800 photos of its interiors, of the materials used for the cladding, and the fittings and furnishings. The interiors were designed by Gio Ponti in a way that would “relate to and continue the architecture”, giving a unified stylistic identity to all the settings and all the furnishings, in the “democratic” conviction that all the “inhabitants” of the building, from the company chairman to the employees, would have to live the same spaces.

Ponti’s design thus included the walls and floors, all of which were clad in Pirelli rubber and linoleum, as well as the doors, lifts, clocks, and lighting fixtures. And the furniture of course, which was designed mainly by Ponti and Alberto Rosselli: from the Arflex chairs to the tables, made by Rima in one version for office staff (with a linoleum top) and in another for directors (with a wooden top). Colour, which was particularly important for Ponti – as he himself says in “Everything in the World Must Be Brightly Coloured”, an article he wrote for Pirelli magazine in 1952 – was used as a “means of correcting the monotony and anonymity of the spaces” in the doors, which were clad in red linoleum, and on the floors, in “fantastic” yellow and black linoleum. The photographic shoots, made in 1960 with the building still almost empty, show the halls, corridors, offices, meeting rooms, toilets, cafeteria, data processing centre, and the 600-seat auditorium for conferences and events in the Pirelli Cultural Centre. The photos published also includes shoots by two great photographers, Gianfranco Corso and Enzo Nocera, who portrayed the Pirelli employees in the tower for reports on work published in 1974 and 1975 in the Fatti e Notizie house organ. These splendid shoots accompany us through the history of a building that has been a dominant feature of the skyline of the city of Milan for sixty years.