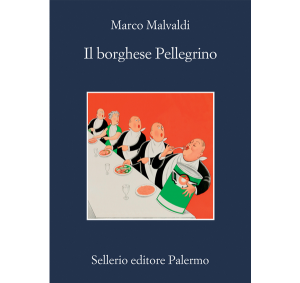 A night-time murder in a locked room in the castle of Campoventoso, which houses an ultra-modern farm. Mezé, a Turkish dish, prepared one icy dawn with peppers, walnuts and pomegranate seeds. A lucrative trade in rather over-spiced canned meat. And no end of conversations about food and business between Italy and the Turkish Empire in the early twentieth century. We have plunged into the pages of Il borghese Pellegrino, by Marco Malvaldi, published by Sellerio. The protagonist is the elderly Pellegrino Artusi, the famous author of Science in the Kitchen and the Art of Eating Well, as well as a shrewd cloth merchant. And, of course, an astute investigator (we have already seen him at work in Odore di chiuso). Between a sophisticated conversation and an exchange of recipes, an amorous spell and the toings and froings of carrier pigeons, we need to find out who murdered a respectable banker who acted as the guarantor of Italian-Turkish relationships. Once again, Malvaldi is brilliant at portraying his characters and linking them to their social settings. And, in quoting from Artusi’s diaries, regaling us with extraordinary pages on how food can create a real bond between peoples: “Cooking is a universal language that needs to be understood only by those who practice it: maybe only music can be its match”. Il borghese Pellegrino Marco Malvaldi Sellerio, 2020