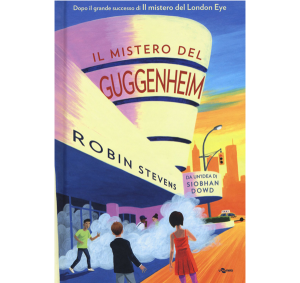 Some young readers who love detective stories will already know Ted Spark, the twelve-year-old protagonist of the first mystery, set in London. It is not hard to be enthralled by his adventures because Ted has an amazing ability to create connections, thanks to his brain that “runs on an operating system that's different from other people's”, enabling him to solve even the most complex cases quite easily. This time Ted is helped by his sister Kat in his attempt to exonerate their aunt Gloria, the curator of the Guggenheim Museum in New York, who is accused of the theft of a work by Kandinsky. The thrilling plot and our young hero's cunning will keep even the laziest reader turning the pages of this book.   Il mistero del Guggenheim Robin Stevens da un'idea di Siobhan Dowd Uovonero, 2017