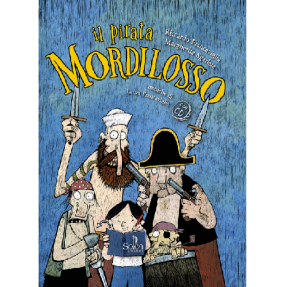 Little Toni’s dad has a very unusual job – he’s a fearsome pirate who sails the seas on his ship. One day, Toni’s teacher asks the children to spend a day working with their fathers and write a short essay on the subject of “What Dad Does at Work”. Mordilosso – “Chewbone” – may be a pirate but he’s still a dad and he will have to make sure that his crew behave themselves when his son is around, without indulging in actions that may be fitting for pirates but that are certainly not for a child. So, no swearing, but just lovely nursery rhymes! A pirate’s life also involves boarding a galleon, but no attacks are allowed on this particular day – only a party with pizza and croquettes, instead of a bloody assault. A father’s love for his son is indeed greater than any treasure one can possibly find on board a ship. This delightful rhyming tale with beautiful illustrations will bring a smile to both children and their fathers when they read it together. The book by Riccardo Francaviglia and Margherita Sgarlata comes with a music CD with some delightful pirate songs, with original music by Laura Sgarlata.   Il pirata Mordilosso Riccardo Francaviglia ; Margherita Sgarlata Splen, 2015