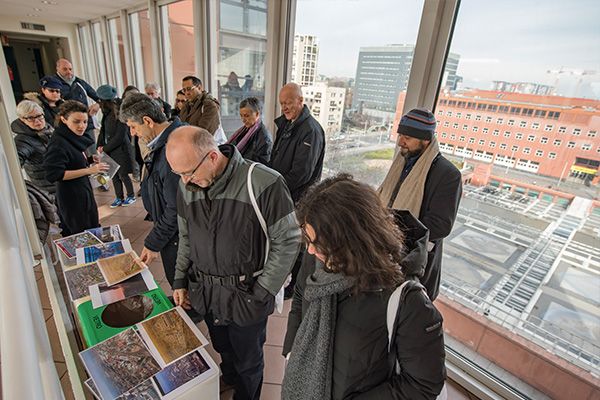 From the Pirelli Headquarters to the Bicocca University Campus and ending in the Padiglione d’Arte Contemporanea (PAC) with the exhibition on the personality and work of the architect Vittorio Gregotti, on the occasion of his ninetieth birthday. These are the stages on the tour offered by the Pirelli Foundation and the University of Milano-Bicocca on the occasion of the anthological exhibition entitled The Territory of Architecture: Gregotti e Associati 1953_2017 (20 December 2017 to 11 February 2018).

On Saturday 20 January, Saturday 27 January, and Saturday 10 February 2018, the public will be able to visit the Pirelli Headquarters – a contemporary interpretation of an industrial construction dating from the 1950s – and the adjacent architectural complex of the University of Milano-Bicocca (buildings U6, U7 and U12), built around from the former Pirelli Pneumatici and Pirelli Prodotti buildings.

These two highly symbolic places exemplify a plan – dating back over thirty years and keenly championed by Pirelli and its then chairman, Leopoldo Pirelli – which introduced a new concept of urban planning based around obsolete industrial constructions. Beginning in 1985 after the signing of an agreement between Pirelli, the City of Milan and Regione Lombardia, the operation to redevelop an area of about a million square metres – known as the Bicocca Project – was carried out by Studio Gregotti Associati. The firm adopted an approach that would lead to full re-urbanisation of the area, and to the idea of a “city within the city”, redesigning industrial Milan to comply with new functional criteria.

The Pirelli Headquarters is the icon of the Bicocca Project: a huge glass and concrete cube that encases a tower, built in 1950, which was used for cooling water for the vulcanising machines. Just as it was a powerful symbol of twentieth-century industry, the tower has now become the emblem of a new industry, taking us into the third millennium. Measuring fifty metres per side, the glass wall that takes up the entire western facade of the Headquarters acts as a sort of opening onto a place of work, where new and old – or rather, new and truly ancient, considering the fifteenth-century Bicocca degli Arcimboldi – come together in the Bicocca district, now totally reshaped by the hand of Gregotti.

Just a few metres – the width of Viale Piero e Alberto Pirelli – separate the Pirelli administrative centre from the U6 and U7 buildings, and from the Residenza delle Fontane (U12) of the University of Milano-Bicocca. The buildings are in a classic red-brick colour, which in the architect Gregotti’s words “intends to recall the industrial origins of the area, giving a sense of continuity, with the idea of the university as a place of work, even more than one of preparation”. Joined by flying footbridges and looking out over the great Piazza dell’Ateneo Nuovo, they are themselves at the forefront of the urban Bicocca Project, which aims to create an innovative cultural network in the northern area of the Metropolitan City of Milan. Together with Pirelli and other local agencies and companies, the University of Milano-Bicocca campus is promoting this wide-ranging project which – with the involvement of local residents – includes the creation of a centre that combines training, research, culture, and business.

Admission free, booking required, until all places are taken

Groups of 25 people at a time

At the end of the tour, University representatives will hand out coupons that, when given in at the PAC ticket office, give the bearers the right to a special reduced admission fee of €4 (instead of €8) to the Gregotti e Associati 1953_2017 exhibition.