Christmases of Years Past
A big-name Christmas in Pirelli magazine 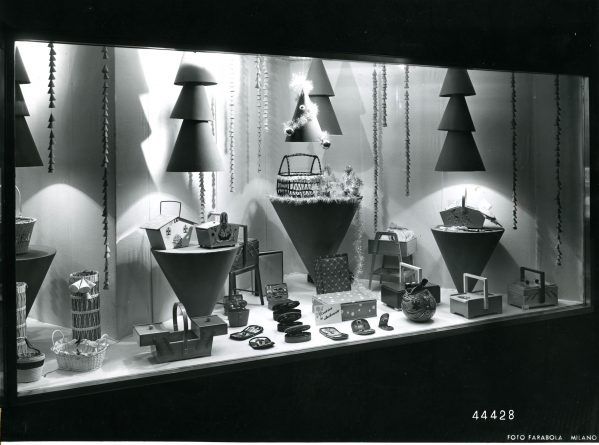 The Pirelli Foundation has decked itself out for the holidays to celebrate Christmas with the great names in literature and graphics who contributed to the historic Pirelli magazine.

In this publication, the designer Bruno Munari described the toy that every children hoped to find under the Christmas tree in 1949 – a little foam-rubber feline armed with a nylon moustache: “Little bigger than the palm of a hand, about the size of a new-born kitten, Meo is a black cat with yellow eyes, and he has some brothers: one white, one yellow, one grey, one brown, and one… green. They are all called Meo Romeo (first name Meo, surname Romeo) and the green Meo was born when the zucchini were ripening.” It was again Munari who brought together the toys in the 1954 Pigomma catalogue. These included the two clowns Tino and Toni, the giraffe Pasqualina created by the Pagot brothers, Disney’s dog Pluto, and Patrizia the doll, to launch a “very silent Christmas machine that makes snow shower down on the Christmas tree”.

The article written by Albe Steiner in 1955 is a journey through the Christmas shop windows of the world’s most luxurious stores: from Macy’s in New York to the great department stores in Paris, to Illum in Copenhagen and the windows of the Rinascente in the centre of Milan, arranged by the artist himself with giant posters of Father Christmas and decorations in the Nordic style.

In 1957 the painter Fulvio Bianconi entered the Pirelli factory of the Azienda Roma to illustrate in the greatest detail every stage in the production of silent Rempel toys: “thousands of balls, dolls and rubber animals come out” of the factory “every day, destined for a frenzied existence in the world of children”.

The cover of the December 1960 edition of the magazine was entrusted to Andrè François, who imagined a mechanical Father Christmas: “What comes out is a rather jumbled drawing, but there’s the great big tunic and the red cap, and also the good-natured expression. And yet, take a closer look and you’ll suddenly discover the trick, and the little Father Christmas turns out to be what it really is: a contraption made of pressure gauges, electric cables, and traces of tyre tread linked to the title of the magazine the drawing was made for.”

And then came the festivities as seen by Umberto Eco: in “Protocol 00/03 Wrapping lights“, a satirical article published in 1962, the author imagines a correspondence between the devils of the Malebolge, who have been instructed to boycott Christmas “… thanks to a certain atmosphere of rejoicing and general goodwill that is created during the period, Christmas celebrations promote cordial relations, putting international conflicts on hold for a few days, leading people to carry out absurd gestures of good neighbourliness, such as giving presents, doubling employees’ salaries, and holding pleasant conversations. It was precisely in order to avoid these dangers that I asked your predecessor, as I now ask you, to draw up a plan for the area of Milan we’ve chosen as a sample.”

In 1963 Eco wrote a Christmas letter to his son Stefano: ”What will happen to childhood when an industrial Christmas brings American dolls that speak and sing and move on their own, Japanese automata that jump and dance without the batteries ever running out, and radio-controlled cars, whose mechanisms one will never see…?“

In the pages of Pirelli magazine, the Christmas holidays were also an opportunity for big-name authors to reflect on modern society, and a source of inspiration for the great names of art and design.