Industry is imagination. Creativity and Innovation: Great Names for Kartell and Pirelli Projects and Products 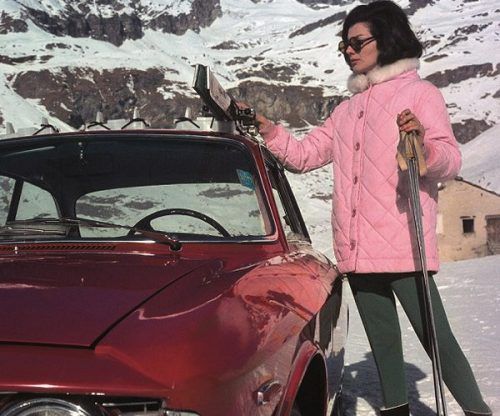 As part of the “Settimana della Cultura d’Impresa” (Corporate Culture Week) promoted by Museimpresa, Kartell Museo and the Pirelli Foundation present the exhibition Industry Is Imagination: Great Names for Kartell and Pirelli Projects and Products at the Kartell Museo in Noviglio. The display retraces a story of research into materials and product innovation in the two companies, both of them symbols of the Made in Italy label. Starting from the ski rack, the first Pirelli-patented product made by Kartell, the exhibition illustrates a journey through Italy at the time of the reconstruction and the economic boom. It includes patents, materials and products invented and shaped by the genius and creativity of great names in design and science – from Giulio Castelli to Giulio Natta and Carlo Barassi, from Bruno Munari to Marco Zanuso – who created objects that, then as now, have accompanied Italians on their journeys and in their everyday lives.

All the intelligence and fantasy of polymers can be found in Pirelli and Kartell. Their paths first crossed in 1950, just after Pirelli had celebrated its first 75 years of international activities in the world of rubber and cables, while Kartell, which had been founded in 1949, was taking its first steps in the production of car accessories, household items, lamps, and furnishings in plastic materials. And it was in 1950s that Kartell made a ski rack for the Car Accessories Division, based on Pirelli patents that were transferred as part of a partnership agreement between the two companies. The innovative feature of the Kartell K101 Brevetto Pirelli ski rack, the first product made by Kartell, was in its combination of new materials. In 1948, the Pirelli engineer Carlo Barassi had patented the Cord, or Nastro Cord, an elastic textile tape made with the same rubberised textile as that used in the manufacture of tyres. Just when the first prototype was ready, a new protagonist became part of this story: the great architect and designer Roberto Menghi joined engineer Barassi to file the patent for the ski rack. Also at Pirelli in the 1950s, the brilliant mind of Carlo Barassi brought about another revolutionary invention for Italians on the move, especially in the winter: the BS3 tyre, with a tread detached from the carcass, with three interchangeable rings that could turn it into a tyre for snow and ice in the winter, or a tyre for summer use. Like the advertising campaign, the logo of the revolutionary BS3 was the brainchild of Giulio Confalonieri and Ilio Negri, two masters of graphic design.

It was thanks to research into new materials that applications in the industrial sector were expanded, leading to the creation of new objects. Foam rubber Gommapiuma had already gone into production at Pirelli in 1933, but it was after the war that its use really took off. Great designers like Bruno Munari would use it for the creation of design objects, such as the famous toy cat Meo Romeo. Towards the end of the decade, Giulio Natta, the future Nobel laureate in Chemistry, carried out his first experiments in applied research in the industrial sector at the Bicocca laboratories, discovering a new way of producing synthetic rubber. And it was Giulio Natta again, in 1954, who discovered polypropylene, giving rise to a brand-new area of industry in plastic and synthetic materials. This discovery was also to be fundamental for the history of Kartell. Natta’s synthetic polymer had opened the door to modernity, which was made of polyethylene, polypropylene, and polycarbonate. These ductile, creative materials meant that Menghi could design containers and watering cans worthy of display at MoMA in New York while Marco Zanuso, together with Kartell, could reinvent the art of sitting and turn it into an icon of the twentieth century. Pirelli foam rubber continued to play its part: “it has revolutionised the shape of armchairs”, said the architect and designer Franco Albini. And the name Albini became linked to Arflex – another Milanese company, set up by a group of engineers from Pirelli, including Carlo Barassi himself – with which the designer Zanuso worked from the moment it was set up.

To this day, Kartell and Pirelli have remained committed to process and product innovation: processes, products and people who have made – and who continue to make – the history of two great Italian companies.

For information about the exhibition, please write to: 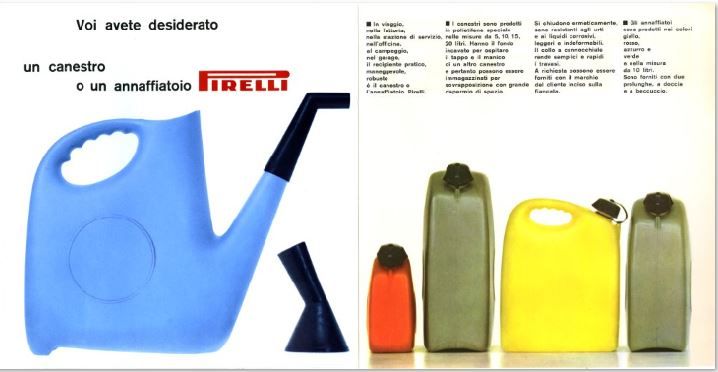