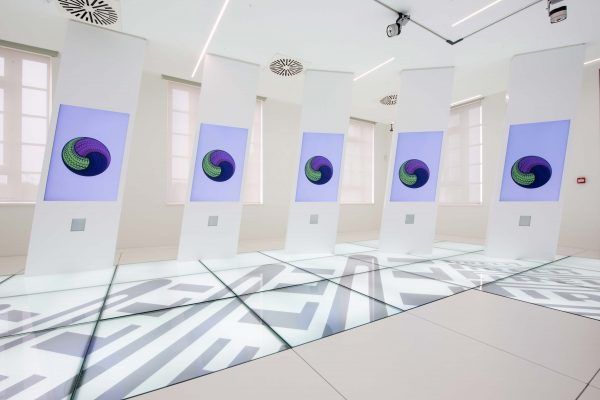 Pirelli has always been a prime mover in the world of communication, and this is clear to see in Advertising with a Capital P, a new exhibition curated by the Pirelli Foundation. The display shows off a treasure trove of drawings made by great Italian and international artists and designers, together with house organs and magazines, and the photographic and audio-visual holdings in the company’s Historical Archive. The new exhibition opens with an immersive video screening that goes back over the projects and events put on by the Foundation in its first ten years of life. Heritage, Art, Racing, Corporate Culture, Sustainability, Factory, Innovation, and Education: 8 subjects for 8 screenings that bring to life the entrance to the Foundation, inviting visitors to “look inside” – starting with the famous phrase by the engineer Luigi Emanueli, Adess ghe capiremm on quaicoss: andemm a guardagh denter (“Now we’ll understand something, let’s go and look inside”). One important aspect of the exhibition is the history of Pirelli advertising from the early 1970s through to the early 2000s, which is illustrated by thousands of printed advertisements made by leading agencies and famous designers. A study of the various materials and audio-visual supports, from film to slides, through to digital files, reveals an incessant interaction between advertising and cinema in Pirelli’s video campaigns. These are re-interpreted in a multimedia format using a site-specific video-installation in the Foundation’s Open Space area. The same exhibition area also includes a timeline with the history of our company, a selection of original historical advertisements, and a whole range of other content waiting to be discovered. But the restyling of the Foundation does not end here: also the Historical Archive has been given a new look with a display of illustrations, photographs, and objects from our company heritage. These include the famous Meo Romeo, the toy cat in reinforced foam rubber created by Bruno Munari, and the tyre that covered 17,000 km in the Peking-Paris race way back in 1907. The iconic photo by Luca Comerio, which in 1905 forever captured the workers outside the first Pirelli factory, greets visitors to the Archive in its new-look version, after the recent restoration. The new display at the Archive also includes Carnak, an oil painting on canvas by Renato Guttuso, an advertisement by Renzo Bassi for the Superflex Stella Bianca tyre, and a large lithograph dated 1913, which now stands out in the area of the Archive devoted to original drawings by those artists who, over the years, have helped make our “Long P” logo famous and recognised throughout the world.

So now it’s time to come and visit the “new Foundation”. We look forward to seeing you!