Power and Control in One shot… And What a Shot! 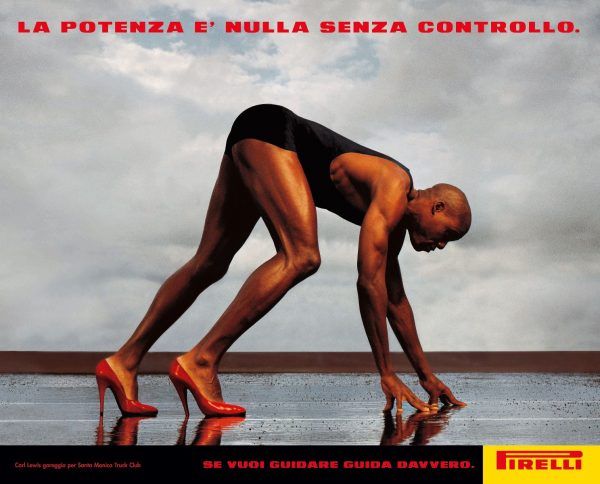 Twenty-five years have gone by since Annie Leibovitz took her shot for the famous Pirelli advertising campaign with the American sprinter Carl Lewis in the starting blocks wearing red stilettos. “Power is nothing without control” reads the celebrated headline, the brainchild of the Young & Rubicam agency, which worked on the company’s advertising for several years. The image of the many-times Olympic champion was also used in 1996 by the photographer Albert Watson – who shot the Pirelli Calendar in 2019 – for motorcycle tyres.

During PhotoWeek 2019, the Pirelli Foundation is celebrating the anniversary with a journey through the evolution of photography in Pirelli’s modern visual communication: from the experiments of Ermanno Scopinich just after the war to Bob Noorda’s collages in the 1950s, through to the ingenious “Tyre with a Capital P” of 1978, and the international wave of creativity in the 1980s and 1990s. The stars are the photographers who, over the years, worked with the Agenzia Centro, and whose successors today illustrate the Pirelli Annual Report.

Photographs from the Pirelli Historical Archive and Advertising with a Capital P, the exhibition now running at the Pirelli Foundation, retrace the inextricable bond that unites photography with the world of business.

Free of charge, while places last.

An aperitif will be offered at the end of each tour.