Advertising and Cinema: The Pirellone as a Symbol 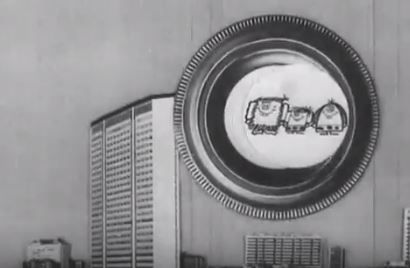 Ever since the foundation stone was laid in July 1956, the scaffolding that protected the Pirellone building site had been used as a wall on which to hang the signs and symbols of a company, Pirelli, that wanted to communicate with Milan and its community. Stretched out between the pylons, the logo with the “Long P” acquired a wavy look, and it may have been this that inspired the designer Alan Fletcher when, in 1963, he created his famously wavy poster for safety in cornering: “Cinturato Pirelli: Sicurezza in curva”. An elephant stood proudly at the centre of the barriers, with its muzzle and trunk transformed into a tyre for industrial vehicles: it was the star of the advertising campaign “Atlas, the giant that will go a long way”, invented by Armando Testa in 1955, and thus used to accompany the growth of another giant – not of rubber, this time, but of reinforced concrete. Other “stories through pictures” commissioned by Pirelli also found their place on those barriers: a plastic boat from the Azienda Monza, for example, and later the Stelvio, the Rolle, the Cinturato and the Winter tyres that were putting Italy on the move. When construction was completed in 1960, there was a party a hundred and twenty metres up and, with the yellow and red banner fluttering alongside the Italian tricolour, the small crowd really could see Milan from on high.

Even after the opening, the Pirellone continued to bring out the creativity of graphic designers, advertisers, and film directors. Among them were Mulas and Noorda – the former a photographer, and the latter a brilliant graphic artist – who in 1959 created a catalogue of Pirelli raincoats set on the tower. With a majestic view of the Pirellone, the misadventures of Mammut, Babbut and Figliut brought the Pirelli Carosello television commercials of 1963-4 to an end. Whether the Cinturato tyre or the wonderful Pirelli foam rubber, the quality of each product was guaranteed by the universally renowned symbol of the Pirelli Centre. And the unmistakable outline of the building appeared in many films, such as Michelangelo Antonioni’s The Night, with Marcello Mastroianni, Monica Vitti, and Jeanne Moreau, and Carlo Lizzani’s La vita agra in 1964, from the novel of the same name by Luciano Bianciardi – with Ugo Tognazzi, who sets out to destroy of the totemic building, but ends up fascinated by it.

Authentic art-house cinema that captured forever a symbol of Milan and Italy on film. Advertising board by Roberto Menghi Advertising board at Piazza Duca d’Aosta,1957, photo by Calcagni Advertising board at Piazza Duca d’Aosta,1958, photo by Calcagni 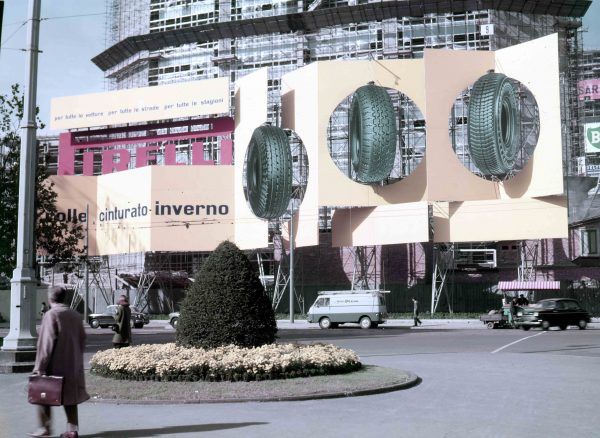 Advertising board at Piazza Duca d’Aosta,1958, photo by Calcagni

Brochure about the opening of Pirelli Centre, 1960