The Pirelli Cinturato: Design and Internationalism 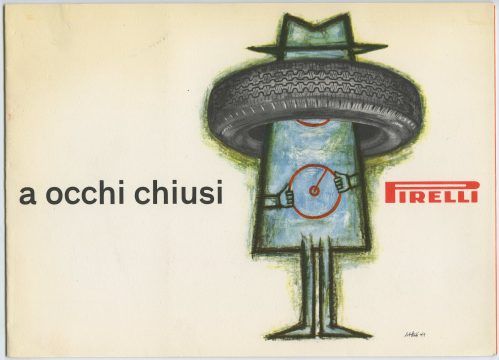 Based on the studies of the engineer Luigi Emanueli and patented in 1951, the Cinturato established itself on the international market in the 1960s as an authentic icon of the economic boom and of Italy on the move. The success of Pirelli’s first radial tyre was also hailed in the 1950s and 1960s by the great advertising campaigns that the company entrusted to the creative minds of famous designers such as Ezio Bonini, Riccardo Manzi, Alessandro Mendini, Pino Tovaglia, and Bob Noorda.

Born in Holland in 1927, Noorda became the art director of the Pirelli Group in 1961. His graphic style was unadorned, making the communication clear and immediate, as we see in the 1959 poster in which the Pirelli Cinturato consists of just three elements: a stylised drawing of the tyre, the logo, and the name of the product. “With Eyes Closed“(1961), for another Cinturato, was the most iconic advertising campaign by Riccardo Manzi. In the advertisement, the driver’s eyes are obscured by a tyre that prevents him from seeing the road, and only the use of Pirelli tyres means that he is perfectly safe. The style is humorous and caricatural, and the touch is rapid and instinctive: all traits that make it instantly recognisable as his work.

In 1966 Arrigo Castellani, who was the head of the Pirelli Advertising Department at the time, and the graphic designer Pino Tovaglia created an advertising campaign under the slogan “A journey on the safe side – Pirelli Cinturato”: a sort of experiment based on the interaction between word games and images. In 1968, Pino Tovaglia again put his name to a new advertising campaign, which focused on the popularity of the Cinturato abroad: a series of colour plates in which the dominant motif is that of the stylised flags of various countries, with a headline in each language stating that “also in France [or in Britain, Ireland, Holland or in the other countries where the tyre had become established] it is called Cinturato”.

By this time the Pirelli Cinturato had become international, and it was not just graphic artists and designers who were telling the world about it. Advertising campaigns were also commissioned over the years from great photographers such as Ugo Mulas, or entrusted to film and to exceptional endorsers such as the driver Juan Manuel Fangio, who starred in a series of Carosello television commercials produced by Gamma Film. Because the Pirelli Cinturato “really is different from the others. Extraordinario!”