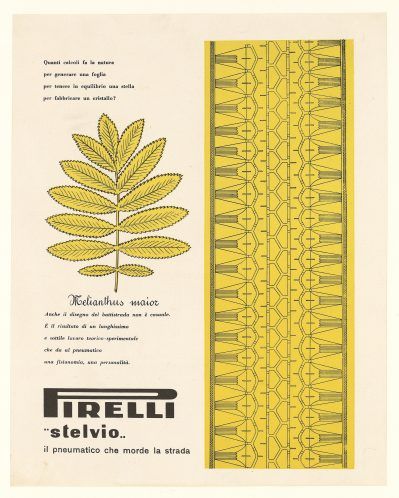 “We’ve prompted meetings between scientists and journalists, between technicians and poets. Without fear of committing heresy, we’ve sent reporters into studios, classrooms, and laboratories to surprise big name, who are as illustrious as they are reluctant, with magnesium […] “. And again: “One of our ambitions was precisely this: to provoke and stimulate an analytical form of prose rather than the same old commemorative pieces – a report rather than an ode, a comment rather than a sermon […]. I’m looking forward to the day when the Realm of the Useful is rekindled by culture, by metaphors, and intelligence. […] Pirelli magazine has tried to encourage its contributors to come up with pondered impressions, but we still have a long way to go to improve on our precision and breeziness.”

These quotations from the historic Pirelli magazine capture and convey an idea of Leonardo Sinisgalli’s commitment and work during his four years as editor-in-chief of the magazine, as well as his idea of culture and his poetic vision. With a profound understanding of mathematical sciences, he truly epitomised Pirelli’s multi-disciplinary culture, with its never-ending search for creating harmony between technology and the arts, keeping the right balance between them, and fostering dialogue and an exchange of ideas between the scientific and literary intelligentsia. Art and industry thus came together to form a new humanism, which found one of its loftiest expressions in the pages of Pirelli magazine. Leonardo Sinisgalli had first come into contact with the Milanese company back in 1937, when he worked at the Società del Linoleum, part of the Pirelli Group. Here he met Giuseppe Luraghi, and when they met again after the Second World War, they founded and later directed Pirelli magazine and, some time after, Civiltà delle macchine, a bimonthly published by Finmeccanica.

What is the secret behind a good advertising idea? What calculations does nature make when creating the perfect shapes we see all around us? What is the sensation we feel when we admire the grooves in tread patterns created not by nature but by ingenious research in Pirelli’s laboratories? What wonders lie behind the work of humans and machines? And then, how was the wheel invented? Where did Leonardo da Vinci’s extraordinary genius and talent come from? These are just some of the topics covered by the engineer-poet in the 18 articles he wrote for Pirelli magazine from 1948 to 1952.

During these years. Sinisgalli called on many leading figures in the worlds of journalism, literature, and art to contribute to the publishing project, requiring the best artists of the day for the advertisements, posters, and advertising campaigns. Pirelli also entrusted him with the curatorship and coordination of “the Company’s advertising events”, both for the Gomma Group and for the Azienda Impermeabili. This meant that also the advertising campaigns of the time reflected his tastes and artistic vision, as we see in the case of the advertisement for the Stelvio Pirelli tyre, under the title “Nature’s countless calculations” in 1952 and the first Pirelli promotional film “News from the Turin Motor Show” in 1951, a short film in colour directed by the brothers Nino and Toni Pagot, which won numerous awards.

Sinisgalli’s vision and legacy in Pirelli did not come to an end, partly thanks to his successor, Arrigo Castellani, who revived the tradition of bringing artists to the factory in the 1960s and continued to involve journalists and intellectuals in the adventure of Pirelli magazine, using the art of literature to talk about work, science and technology. 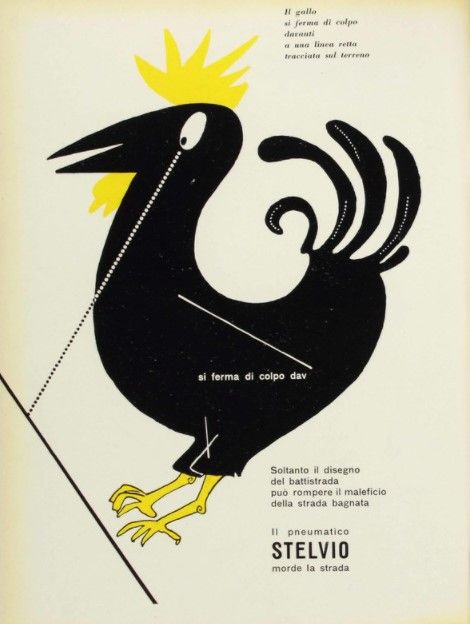