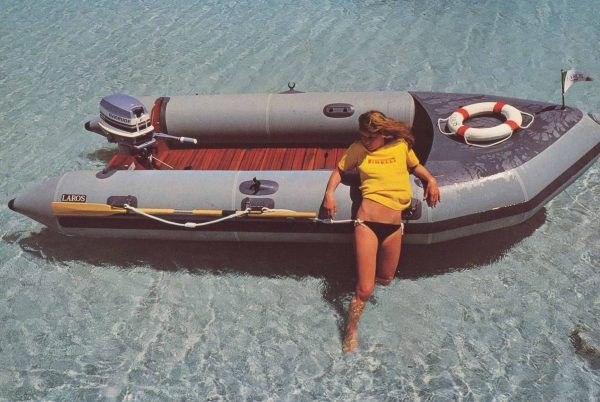 A photo report by Federico Patellani entitled “Rubber on Holiday” appeared in Pirelli magazine no. 4 in August 1950. “It could be said that rubber works while we rest”, wrote the photographer. In the years of the economic boom, inflatables began to play a triumphant role in our holidays. The absolute star of the summer was the rubber dinghy, no longer a rescue vessel for lost soldiers or flooded-out peasants, but now the aquatic version of mass motorisation. The Nautilus made by Pirelli’s Seregno company was unmistakably orange, with blue seats and rowlocks. Its successor, towards the 1970s, was the Laros, which became an icon of freedom and of respect for the environment, for the discovery of deserted beaches and coves. For those who preferred the peace and quiet of a lake, Pirelli offered a range of fibreglass boats from its Monza company – the Itaca, Ninfa, and Levriero. With oars or engine, they were light and easy to load onto the roof of a Seicento, or to tow on a special trailer.

The air mattress was a champion of adaptability and transformation: perfect for the beach, or for camping, “letting your thoughts mingle with birdsong and distant calls”, as Patellani philosophised while showing a foot clad in trekking boots with Pirelli rubber soles. Another icon of rubber for the perfect Italian holiday was the mask, which with flippers and spear gun – all in the Seregno company catalogue – made up the classic “pinne, fucile ed occhiali” of Edoardo Vianello’s hit song in 1962. The Pirelli mask for observing marine life found an exceptional endorser in Ingrid Bergman, who was initiated into underwater wonders by Roberto Rossellini himself in 1949, while filming Stromboli. And Miss Sweden also showed how she appreciated Pirelli flippers. After years and years of seaside success, bathing caps have rather gone out of use, but way back in the 1920s, they were the subject of advertising sketches that were minor masterpieces of Art Deco.

Bathing costumes in Lastex stretch fabric reached the height of popularity in the 1950s. They were produced by Pirelli’s Revere company and were worn by none other than Marilyn Monroe, on the beaches of California in 1952. For everyone, Seregno also offered Walrus, a compressed-air breathing apparatus with 10-litre interchangeable cylinders, as well as PVC marker buoys complete with line and flag. And while dads dived the deep, mums and kids stayed on shore to play with the highly colourful Pirelli balls: a real evergreen that never stopped bouncing from holiday to holiday, decade to decade.