The Muse in the Wheels. Pirelli: a Century of Art at the Service of its Products 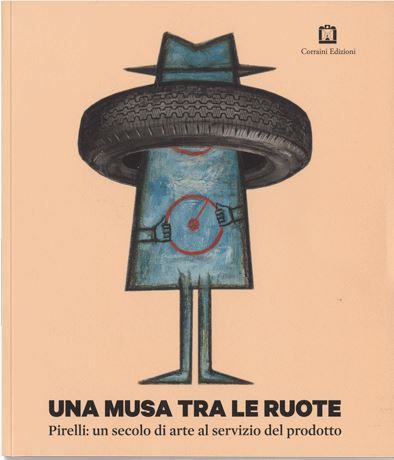 “[…] I can say that the archives are packed with ideas left in a germinal state, rough drafts, revisions, errors, because the tastiest fruit is undoubtedly the hardest to reach, thought it is also the one that shows no sign of that effort, apparently a spontaneous result produced by pure grace. I have the trace of these reliefs here before my eyes, and I get lost in them like and archaeologist in front of Mesopotamian seals, or a child starting at the motif of an old carpet, unable to find where it begins or where it ends.” (Leonardo Sinisgalli, in “Bassorilievi sui pneumatici”, Pirelli. Rivista d’informazione e di tecnica, no. 4, 1952)

This quote can be found in The Muse in the Wheels. Pirelli: A Century of Art at the Service of its Products, available in bookstores as of this May. Edited by the Pirelli Foundation and by Giovanna Ginex and published by Corraini, the book recounts the history of marketing and communication at Pirelli, beginning with the promotion of the archive fund for the collection of original sketches and drawings (from 1872 to 1972) that have been restored by the Pirelli Foundation.

The book presents over 200 works by a variety of artists intended to promote products, to illustrate Pirelli magazine, or to celebrate the organisation’s anniversaries, all with the awareness that this archive represents an invaluable cross-section of the history of the figurative arts, of graphic design, and of corporate communication.

The catalogue of works, which represents the core of the book and is divided into three sections, is preceded by three texts that provide background and historical context. The first section of the catalogue, then, is dedicated to productadvertising sketches; the second, to illustrations for Pirelli; and the third, to works executed for the organisation’s fiftieth and seventy-fifth anniversary celebrations

A significant section of the appendix has also been dedicated to product spec sheets, complete with images taken from patents and historical catalogues and which describe the Pirelli products involved in the marketing campaigns, and the book concludes with a selection of biographic profiles of some 60 authors who have helped Pirelli with marketing and communication over the course of the last century.

Marcello Dudovich, Aldo Mazza, Leonetto Cappiello, Bob Noorda, Riccardo Manzi, Alessando Mendini, and Armando Testa are just a few of the artists who have offered their creativity to assist the organisation with ad campaigns in a range of styles, all distinctly “Pirelli” and all of which have featured the logo that has represented the company since 1907.