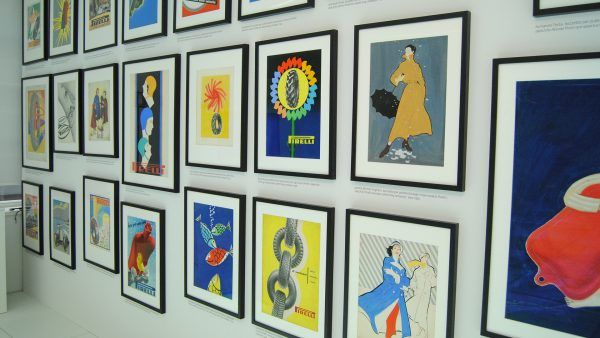 When the book A Muse in the Wheels was published, we put 56 original works on display for the new installation of the Foundation’s Open Space. The works trace the history of the company’s communication from the 1910s to the late 1960s, illustrating the very close client relationship with internationally renowned artists, which has always been a feature of the company.

There are sketches that were used to advertise the products, drawings created to illustrate articles and reports in Pirelli magazine, and others to celebrate the anniversaries of the industrial group: the works on show were made by such great artists as Armando Testa, Bruno Munari, Bob Noorda e Lora Lamm, to name but a few.

The materials selected also include three large-format works with pictures of factories and production statistics, made by Domenico Bonanimi and Umberto Ubaldi in 1922 and displayed at the Museo Storico delle Industrie Pirelli to celebrate the company’s 50th anniversary.

On the floor there are reproductions of a series of photographs that show how the advertising message has been conveyed by means of posters, store-window signs and trade-show stands. At the centre of the Open Space, also on the floor, is a selection of technical data sheets that tell the stories of the most famous Pirelli tyres, from the Cord to the Stella Bianca, to the Stelvio and the Cinturato.

A special display case contains a Cinturato All Season – a modern tyre designed to offer an alternative and innovative form of mobility – in an original reinterpretation of an advertisement for the Pirelli Cinturato created by Riccardo Manzi in 1957.