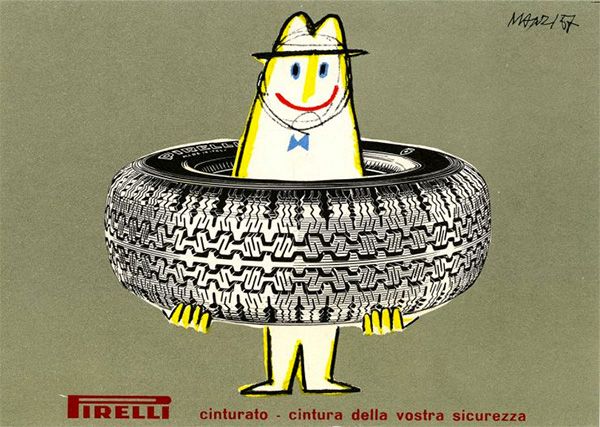 “In terms of design, I have always been interested in both motorbikes and in rubber as a material, so it was a real pleasure to work with Pirelli, which is famous for working alongside a lot of artists and designers.” The words of the noted designer Tom Dixon as he describes “Pirelli by Dixon”: a limited edition collection of three new tyre tread designs for scooter tyres which will be presented during the latest “Salone del Mobile” in Milan (4-9 April 2017) as part of the “MULTIPLEX, Yesterday, Today and Tomorrow” exhibition, held at the Manzoni Theatre.

The exhibition will feature a “Rubber Shop”, with new tyres on show alongside an installation created with materials provided by the Historical Archive of the Pirelli Foundation. One of the walls of the shop will feature a selection of technical designs of motorbike and car tyres produced by Pirelli from the 1950s to the 1980s for catalogues and product lists and also used by designers for company advertising. Like Ezio Bonini in 1953 for the “Motor Scooter” tyres , Bob Noorda in 1957 for “Rolle” tyres, or Riccardo Manzi in various editions of his famous “a occhi chiusi” campaign with little human figures, designed in the 1960s for the Pirelli Cinturato. These ironic characters borne of the imagination of Manzi inspired another installation in Dixon’s shop: three tyre stands, the shape of which apes the subject of a picture postcard designed by Manzi for Pirelli in 1957.

Another area of the Rubber Shop will be dedicated to a life-size copy of the cat Meo Romeo, a well known rubber toy created for Pirelli-Pigomma in 1949 by Bruno Munari, who described his creation in the pages of the Pirelli magazine: “What else could Meo Romeo need? He can’t talk, I know, but neither can the Mona Lisa. And the Mona Lisa isn’t soft to touch, she can’t move and you can’t make her jump. Meo Romeo is a new rubber cat for modern kids.”

After visiting the Pirelli Foundation last summer, Dixon picked out the materials to be used in creating his exhibition at the Manzoni Theatre. Now, just as it always has, the Pirelli style continues to fascinate and inspire the world of design.