An End to Egoism 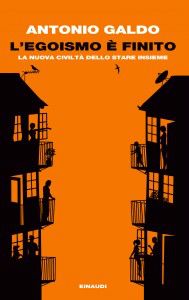 A positive future made up of improved personal relations, clarity of intent and different work relationships. This is the vision of a “new communal civilisation” as foreseen by Antonio Galdo (journalist and writer, concerned with issues of waste and the developments in public life), in his recent book “L’egoismo è finito” [“An End to Egoism”]. In just over one hundred pages he tells of a change underway in the social paradigm, i.e. a move from egoism to the application of new theories of communal living in society and at work.

Galdo starts with a sharp and provoking sentence – “this is a book about love” and continues with a quote by Aristotle. However the book also discusses forms of economics, society and communal living that differ from current ones. He does this with numerous examples, new ways of producing (co-working) and of living (co-housing and smart cities), starting with an observation: “for decades we have blocked out the vital need to be together, relinquishing the energy given off by a community when the bonds that join together people and things, places and identities, interests and emotions take shape”. Now instead “the major economic crisis forces us to seek new fundamentals, and not just economic ones”. At work and in social dealings a new way of seeing things is gaining ground. Galdo then discusses new eco sharing, from city allotments to vertical gardens, the effective appeal of swapping versus the individual pleasure of possession, the sharing of ideas via Web technologies and a new conception of work and the workplace.

Apparently a long way from the more pressing problems of corporate management, Galdo’s reasoning instead comes very close to the themes of a new entrepreneurship, far from the dichotomy of boss and workers, which sees the factory, territory, corporation and labour closely linked in a single destiny which does not necessarily have to be negative.