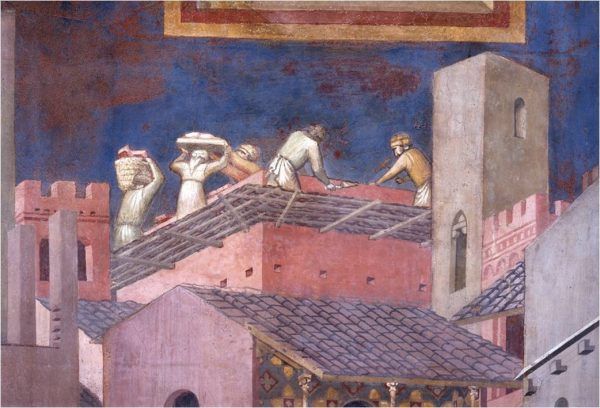 In order to make a critical assessment of our modern-day economy, to cast off the restraints of GDP (gross domestic product) and to reflect upon well-being and happiness and thus on the quality of life, one can usefully take as a starting point a work of art of the Italian 14th Century, “The allegory and the effects of Good and Bad Government”, painted by Ambrogio Lorenzetti between 1338 and 1339, on the walls of the “Room of the Nine” or “of Peace” in the Palazzo Pubblico building in Siena. Bad Government, in this portrayal, brings disorder, misery and ruin. Good Government creates prosperous trade, a well-cultivated countryside and industrious artisanal workshops, and is accompanied by cheerful parades, festivals, and obvious manifestations of happiness. Siena, that rich and powerful city State, was strong and proud thanks to this.

Here is the point: thinking of the economy not as a “sad science” (according to the critical definition by Thomas Carlyle) but as a combination of knowledge and competencies aimed not simply at riches, but above all at well-being. A radical cultural turnaround in comparison to the mechanisms which place maximum emphasis on the accumulation and growth of the economic value of wealth for those who already have some. It is a transition from supreme individualism dominated by the antagonistic competition between the homo homini lupus and the strength of ideas of the homo homini natura amicus. An idea which had featured strongly in the lessons on economy by Antonio Genovesi, the father of economic science, the leading intelligence of Neapolitan Illuminism, highly thought of by the Paris philosophes as by his friend and student, abbot Ferdinando Galiani and considered a master by Adam Smith. Genovesi was well-acquainted with the paintings of Lorenzetti. And it is indeed to him that we owe these thoughts about the goal of “public happiness” and of a “civil economy” which are being debated again today, in an attempt to repair the damage caused during the times of financial greed and egotistical growth, which are generating growing and unacceptable inequalities.

A civil economy, happiness, well-being, competition linked with cooperation – these were recurrent themes in the course of a recent meeting with the evocative heading, “The Economy on trial. Demographics, democracy and happiness”, organised by the LUISS university in conjunction with the Cortile del Gentili group, the organisation sponsored by the Papal Council for Culture, led by cardinal Gianfranco Ravasi, in order to foster a dialogue between believers and non-believers about the major challenges of modern-day society (this was covered by Il Sole24Ore, 15th March).

Not just economic growth and profit, they say. But well-being and development. We should not forge ahead with economic processes based on environmental and social dumping , with economic activities marked by low salaries, minimal security of work, spoliation and devastation of the environment, and illegal competition. And whilst the pursuit of profits remains central to the activity of enterprises, such profits should be sought within a framework of social and environmental sustainability, with careful attention paid by the enterprises themselves not only to their shareholders, the owners of their capital, but above all to the stakeholders, all the social players who have a relationship with the enterprise: the personnel, the communities and the localities, the suppliers, the consumers. From value (profits) to values.

It is a possible way forward, about which we need to reflect from time to time, in the search for an economic theory which continues to hold firmly onto liberal values, but which aims to connect them with a sense of social responsibility.

An important contribution to the “Economy on trial” in Rome came from Jeffrey D. Sachs, a seasoned economist and head of the Earth Institute at Columbia University, in a speech witnessed by Pope Francis dealing with the very same themes of the environment and the battle against poverty and social inequalities.

“The social economy of the marketplace” dear to the hearts of traditional European culture, was described by Sachs as a point of reference which needs to be debated (including for welfare reforms). However, the Italian Constitution too, filled as it is with values of sociability and enterprise, liberty and social redemption, can offer important cues for reflection (on the occasion of the seventieth anniversary of its introduction, perhaps it would be a good idea to re-read the deeds of the Constituent Assembly and debate the suitability for current times of the analyses by the Constituent Fathers, from Piero Calamandrei to Costantino Mortati, from De Gasperi to Togliatti, from Nenni to the then extremely young Aldo Moro, who was already highly attuned to the idea of social thinking inspired by Christianity).

In this arena for debate we can find criticisms of the obsession with GDP growth – a merely quantitative dimension for the assessment of wealth – and also the research launched into the transition not from growth to recession (something which is never “a good thing”, however) but from growth to sustainable development. And the index of reference for this can be the BES, which in fact measures “Equitable and Sustainable Well-being” and which for several years Italian governments have tracked carefully in preparation for the DEF, the principal guidance document for the economy of the country.

There is another indicator to be taken into consideration: the “World Happiness Report”, whose 2018 edition, the sixth, was presented in the last few days in the Vatican (Corriere della Sera newspaper, 14th March), on the occasion of the “World Happiness Day” initiated by the UN (its celebration is on 20th March) in order to ask governments to adopt “a more inclusive, equitable and balanced approach to an economic growth which promotes sustainable development, the eradication of poverty, and the happiness and well-being of everyone”. It is not a question of good intentions. But of political signposts. Of strategies of choice between an economy of accumulation, of closures and of inequalities and an economy in which competitiveness, wealth and social inclusion are convergent processes.

In that “Index of Happiness”, compiled by taking into account various indicators (per capita revenue, social welfare, prospects for a healthy life, freedom of life choices, generosity, perception of corruption and life expectancy compared to the country’s social welfare parameters), in first place is Finland, followed by Norway, Denmark and Iceland. Germany is in 15th position, followed by the USA and by Great Britain. France is 23rd. Italy is 47th: it was 28th in 2012, then was pushed down to 50th as a result of what for us were the particularly onerous effects of the Great Crisis, and is now slowly moving back up the index again.

It is a political challenge, moving from growth to development. It is a matter for our citizens, for the companies which base their competitiveness specifically on sustainability and on social responsibility, for public administrators, and for politics. A “Good Government” challenge. As were clearly aware, as long ago as the 14th Century, the sage Ambrogio Lorenzetti and the far-sighted Nine governors of Siena