Italy, an environmental and social sustainability leader and example through the virtuous choices of its companies 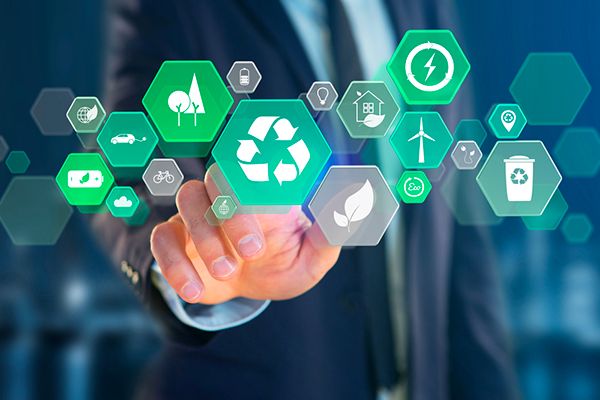 Italy is the environmental sustainability leader in Europe. Many of its businesses, from manufacturing to services, are at the international forefront of virtuous behaviour towards the environment, respect for people, inclusion and social solidarity.
Here are the figures: Italy’s greenhouse gas emissions are lower than France, Germany and the EU average (203.4 tons of CO2 equivalent per billion euros of added value, EU average 257.2 tons), consumes fewer raw materials (286.8 tons per billion euros of added value, EU average 446.5), consumes less energy (87.4 according to a calculation of 10 to the third joule, the unit for the measurement of energy, work and heat, for one billion euros of added value, EU average 203.5) and recycles and recovers more waste than all the others (83.4% of total waste, compared to an EU average of 53%). By reading the data from the Confindustria Study Centre, we could call this a virtuous circular economy.
We are living in times of increasing awareness of sustainable development issues. This is evident from the commitment of the younger generations, citing the million children who took up Greta Thunberg’s call for a “Friday for Future” in 180 places across Italy last Friday. The economic world also shows an active awareness of the extent to which sustainability can be an extraordinary driver for improving the general competitiveness of a country and its businesses.
Here is a figure from the Symbola Foundation’s investigations in its “GreenItaly Report”: 30.7% of manufacturing industries (with peaks of 42% for chemical and 38.6% for rubber and plastic companies) invested in eco-sustainable products and technologies, in the five-year period of 2014–2018. Supported by Assolombarda and a variety of companies and foundations and through conferences, research and analysis, adhering to the CEO’s Call to Action launched by CSR Europe, Sodalitas urges business managers to “strengthen dialogue and interaction between politics, civil society and commercial and industrial counterparts and to join forces to accelerate inclusive growth, tackle climate change and create sustainable prosperity”.
If we move from general data to businesses (Pirelli, Barilla, Enel, UniCredit, the brightest fashion companies, etc.) we find good examples of commitments that are positive indications of a real “paradigm shift” on which to establish a redevelopment and new legitimacy of the economic system.
Pirelli was recognised again this year as part of the UN Global Compact Lead, the group of companies most active in Corporate Sustainability, implementing the United Nations Sustainable Development Goals, the ten principles concerning environmental and social sustainability. It is also the global sustainability leader of the Dow Jones Index in the Automobiles & Components sector, with widespread commitments among its suppliers.
“An alliance between food producers for the sustainability of the planet”, proposes Guido Barilla, president of the group of the same name, one of the largest European food companies (Il Sole24Ore, 26 September). He points out that “companies can no longer limit themselves to product control” and insists on “sustainability in agriculture and livestock, logistics and packaging, all the way to marke”.
Even the big banks like UniCredit and Intesa talk a lot about sustainability, devoting research and specialised board discussions to it. In particular, UniCredit announced the establishment of a Sustainable Finance Advisory Team, a decision that will enable the bank to combine its sustainability expertise with that relating to capital markets, to deepen the dialogue with customers on environmental, social and governance (ESG) issues and facilitate access to the European green finance market.
The Bank of Italy encourages the trend: Governor Ignazio Visco calls for “sustainable investments against climate change”, renewing its equity portfolio (8 billion euros) with a focus on companies that follow the UN ESG criteria.
And clothing? “Green era fashion is real and sustainable,” according to the headlines in La Repubblica reports from Paris Fashion Week. Be it opportunism or sensitivity to the changing times, the message from the major international brands is clear: we will dress according to ecologically correct criteria.
In the economic world, the choice of the Business Roundtable (almost two hundred large companies of Corporate USA) to shift from the criteria of shareholder value to those of stakeholder value is spreading, with the main focus on the environment, people, employee rights, consumers, suppliers – a real innovation in the guidelines of capitalism and an indication of a radical reform of choices and behaviour (we have spoken about this in previous blogs). Europe is also stirring: from the energy companies like EDF, Acciona and Iberdrola to retail groups like Unilever and Ikea, a variety of large companies have decided to coordinate efforts and strategies to support the transition to a zero-emission economy. As such, the Corporate Leaders Group Europe (CLG Europe) was created in mid September,
a multi-sector partnership with great ambitions, launched in Brussels by the Cambridge University Institute for Sustainability Leadership. The members of the partnership had already started working on the climate emergency (publishing a five-point document on climate priorities to be addressed jointly with the institutions earlier in the year). The formal launch of the institution will now increase its relevance in the region, reinforcing the capacity of companies in the organisation to influence European climate policy.
The EU, with the Commission headed by Ursula von der Leyen, is already showing a willingness to initiate environmental and more generally sustainable policies, with an ambitious new investment plan in mind. Germany announced around 100 billion in green investments over ten years. In Italy, the Conte government speaks of a green new deal, despite struggling with large budget constraints, in order to launch new public investments. The world is moving and companies will continue to have a role of stimulating this great transformation of values, expectations and behaviours – an example and driving force for politics and public institutions.