Business literature about an Italy in motion, narrating work, creativity and innovation 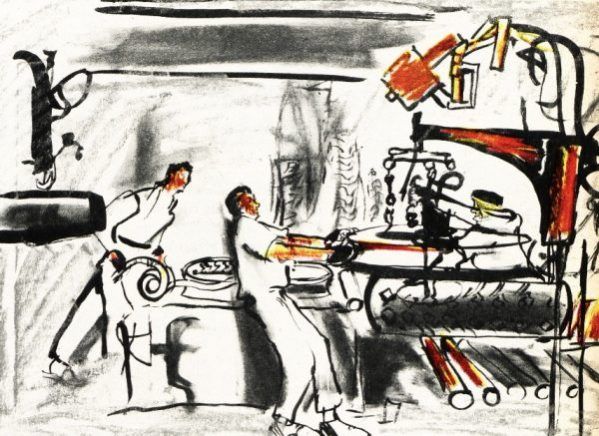 Telling the story of businesses in order to tell the story of Italy. Giving voice to the men and women who are at the heart of the stories of factories, industrial workshops and construction sites, the networks in which production and services are intertwined – spaces in which new ways of doing things are invented every day. And in so doing, giving the dignity of representation to people in an active country, dedicated to bringing about change and to improving the status quo – the polar opposite of the stereotype of “l’Italia alle vongole”, that is, a slovenly, conformist, family-oriented and patronage-focused nation. Stereotypes, as we know, are often based on a degree of truth, but commonly end up being a profound misrepresentation of the prevalent ways of living and being of a people, a community, a nation. In all likelihood, the Italy of business looks rather more like the “real” Italy than the lazy, dishonest mask that is often presented. The drive to embark on new projects is more than simply an unwillingness to make do with what we have.

In actual fact, Italy is a land of creativity, of companies that, despite everything, continue to invest, grow, innovate and conquer leading positions in international markets, and it is precisely these companies that marry competitiveness with social inclusion, historical memory and cutting-edge technologies. They build well-being, they create jobs. They are one of the key drivers of change. As such, these companies deserve to be considered as a linchpin for the EU Recovery Fund programmes on the green and digital economies, and they demand a better narrative than the one that has unfortunately long been widespread in major swathes of public opinion, political circles included. In short, they are in need of better representation.

These observations are behind the idea of a “Business Literature Award”, supported by ItalyPost, in order to highlight literary works that provide an original account of the world of industry and services, the link between work and territory, the ability to “fare, fare bene e fare del bene” (which translates as “do, do well and do good”), the drive to relaunch the country through economic processes and the evolution of technologies. To enable the dissemination of the positive values of business culture, a vital cornerstone in the sustainable development of Italy within the wider context of Europe.

The response from authors and publishers right from the first edition of this award has been overwhelmingly positive. Around sixty books were received by the jury, along with numerous requests for information and clarification, and it received substantial media attention. Of the twenty titles selected by a technical committee, the jury (composed of key figures from economic and cultural circles) selected a further five, which now face the most difficult test: the books will be read, judged and voted upon by a popular jury (two hundred people), and the winner will be declared at the Festival Città Impresa in Bergamo in May.

In the meantime, a number of things can already be said with regard to the works selected: the twenty books that made it through the first round are all of high quality, and describe and document the problems, tensions and features of a changing economic world – which is almost undergoing a metamorphosis – with accuracy. These books include essays, biographies and investigations, works that draw together elements of real life with some of the narrative structures typical of fiction. And in choosing these works, the jury did not get bogged down in questions regarding literary genre and style (in reality, genres have been mixing with one another for some time now) but instead focused on incisiveness, readability and above all, the capacity to portray and communicate the complexity of today’s economic and business landscape.

The first of these is a study of the transformation of Italy’s biggest automotive group, above all during the era of Sergio Marchionne’s profoundly innovative leadership, with its focus on global markets, product quality, labour productivity and relations with international investors. The second book reconstructs the extraordinary story of the excavation of the Mont Blanc tunnel in the early 1960s, a masterpiece of engineering and construction in the very best Italian tradition, and a shining example in terms of the time taken to complete it and the efficiency of the results (indeed, it is an example that still holds today). The third looks at the company structure from the inside, through the hardships and changes that affect roles and skills, triggering fear and conflict, and providing the fuel for dreams. The fourth book provides an original analysis and description of the world that exists between fashion and the textile industry, with particular attention paid to the creativity and dynamism of the small and medium-sized companies that are typical of the North East of Italy. Finally, the fifth work retraces the history of a great Italian brand, with a number of extremely interesting witness accounts of the evolution of a family business that defies time and links an ancient product – a fountain pen – with the latest production technologies and the most sophisticated marketing strategies.

Each is an exemplary story of doing business, and of the relationships that are established through this, between research and production, between the world of work and the local territory, between creativity and the strict implementation of plans and programmes, and between imagined projects and the way in which these are transformed into reality. When put together, these narratives represent an extraordinary and highly effective account of an Italy in motion; a nation which – above all in these times of widespread crisis – merits attention, and deserves to be listened to.