Milan in pictures:
using memories of the rubble and the abandonment of the pandemic
to illustrate the city’s ability to rebuild and recover 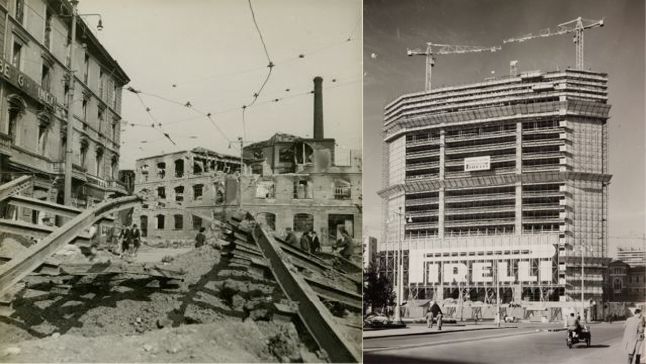 “We will rebuild”. It’s May 1945, barely a few weeks after the Liberation. Socialist Mayor of Milan Antonio Greppi stands looking at the rubble of the war-torn city, a sash in the colours of the Italian flag wrapped around his body and the glimmer of a smile on his face, despite his stern gaze, as would be befitting of a popular authoritative figure in a new-found democracy, and makes a commitment, embodying the soul of a wounded and semi-destroyed city and rather than dominating, outlining a new horizon. A reconstruction, to be exact. Just a year later, on 11 May 1946, that reconstruction had come to be represented by: the Teatro alla Scala, which reopened as the new season got under way,. having been ravaged by the bombing that took place on the night of 15-16 August 1943. Now there it stood, in all its illuminated, red velvet-draped glory, Arturo Toscanini returning to the podium, having previously left Italy for America in protest against the violence of the Fascist dictatorship, to conduct an orchestra that would perform pieces by Verdi and Rossini. “We will rebuild”, indeed.

Those words uttered by Greppi have proven to be the perfect title for an exhibition inaugurated last week in the Sala delle Colonne at the Gallerie d’Italia, right on the Piazza della Scala itself. The exhibition comprises seventy photographs, selected from the extensive Publifoto archives, that tell the story of a Milan that had been destroyed by the Anglo-American bombings of ’43 and, alongside them, another series of images taken by photographer Daniele Ratti, who revisited those very places featured in the historical photos (including the Last Supper, La Scala, Galleria Vittorio Emanuele, Brera, Sant’Ambrogio, the Università Statale and the Piazza Fontana) just a few months ago and has portrayed them in images of the equally painful, albeit in a different way, days of the Covid-19 pandemic. A Milan that had been left wounded by the war, bruised yet still dynamic, and the deserted and silent Milan of the lockdown. The rubble of monuments, churches, houses and apartment blocks, and the emptiness of modern-day fear, the common theme being reconstruction, starting over again. Rebuilding from the ruins of war, or from the fractures caused by illness and recession that we are seeing today.

The exhibition has been curated by Mario Calabresi, who has selected the photographs featured from among the thousands of frames held in an archive of some seven million images that was saved from being dispersed and lost completely by Intesa San Paolo, and features a highly commendable cultural and civil selection. It will remain open to the public until 22 November and will undoubtedly be a topic of conversation for a long time to come.

That Milan of ’45 and the reconstruction that followed soon demonstrated just how dynamic the city was, from the initial reopening of the factories and places of work to successful efforts to boost wealth and the restoration of that profound sense of pride in “doing things and doing them well” for which the Milanese have been renowned throughout the course of their history. Now here it is preparing for a recovery that will soon lead to an economic boom, bringing together industry, banks, businesses, universities and the cultural sphere, that same original combination of dynamism that made Milan the only city of its kind in the country — a great deal of creative initiative, the international outlook of an Italy that is very open to its European neighbours, a distinct attitude towards solidarity and social inclusion (Milanesi si diventa (“You’re not born Milanese; you become it”), to quote the incisive title of a beautiful novel by Carlo Castellaneta, born in Milan to a family of Apulian origin) and a special taste for “polytechnic culture” (Il Politecnico was, in fact, the name of the weekly magazine launched by Elio Vittorini in the wake of the liberation, named after the publication of which Carlo Cattaneo was so fond and attempting to weave the threads of a “useful culture” to interpret, guide and illustrate the change).

The dynamism of Milan soon came to be represented visually by a symbol that rose up from the plain of the metropolis, that symbol being the Pirelli Tower, designed by Gio Ponti and inaugurated just sixty years ago as the headquarters of a multinational company with strong Milanese roots, before going on to house the offices of the Lombardy Regional Council. It would become a key landmark representing architectural beauty and productivity, industry and culture, an international metropolis and local institutions that, during the 1970s, when the regions were introduced, aspired to good *partecipazione* governance and good resource planning. A symbol of the “rising city”, visualised and painted in the early 20th century by extraordinary artist Umberto Boccioni.

Nowadays, the skyscrapers, from Porta Nuova to City Life and various other areas currently under going intense transformation, are a constant feature in Milan — a metropolis that generates 13% of the national GDP and 13% of the country’s exports, hosts some 200,000 students from all over Italy and, for some time now, from various other countries around the world at its universities, and continues to grow by leveraging the synthesis of industry, finance, high-tech services, research, training, culture and quality of life. An open-minded metropolis, and one that is, at the same time, somewhat fragile; indeed, the pandemic has certainly highlighted its problems, imbalances and limitations and continues to do so.

This is why it is worth acknowledging this fragility and above all endeavouring to improve issues relating to governance, social balances, competitiveness and sustainability, not to mention of course, planning and laying the concrete foundations for a new start, even amid the dark, painful times of a health and economic crisis that continues to rage. And remembering how the city was rebuilt from the rubble in the form of a wonderful photographic exhibition. And even thinking back to the emptiness, silence and fear of those first months of the Covid-19 crisis. And reminding ourselves, nevertheless, on a daily basis, that beyond the crisis, beyond the disease, the pain and the social discomfort, there is great energy, and that energy will ensure that life goes on.

‘Here, any business is possible’: the long view from Milan of the EU’s recovery plan
With the effects of the pandemic and the recession, metropolises are in crisis, but they will remain centres for development, provided they can improve quality of life and work inside them
Villages and suburbs need to “mend” to be brought back to life, with the digital economy, 5G, better quality of life and jobs
Load more
Grazie per la tua richiesta
Abbiamo preso in carico la tua richiesta, il team della Fondazione Pirelli ti contatterà per confermare la disponibilità.
Grazie per la tua richiesta
La prenotazione al momento non è disponibile.
Thank you! Registration was successful!
We have sent you an e-mail to the e-mail address you provided. Click on the link inside to confirm the registration.
Register
Already registered click here
Warning! Check the correctness of the data entered.
Enter
Forgot password? click here
Warning! Check the correctness of the data entered.
Forgot password?