The hi-tech piazza of Milan and foreign investment: one example to set against the rhetoric of a “happy slowdown” 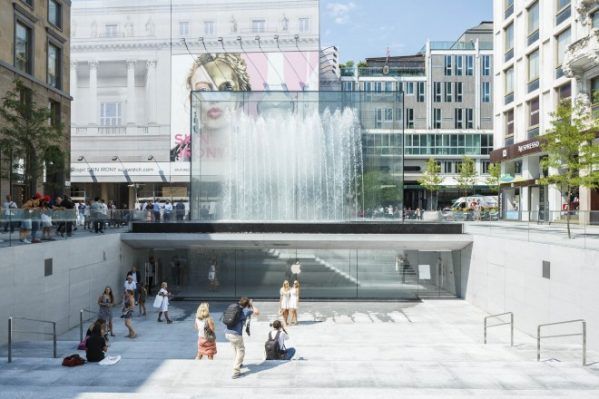 A city piazza, in Milan. An ancient one, Piazzetta Liberty, well-remembered by the older Milanese citizens for its elegant blocks of flats and traditional bars. An ultra-contemporary one, now, with its huge fountain within a glass prism which opens onto a staircase leading to the new large Apple retail store. An extraordinary synthesis between European tradition and the image that recalls New York. Milan is continuously renewing itself, as a rounded, welcoming and inclusive city. And its main players are the good public administration body which upgrades the locations and stimulates the businesses and the multinationals in a network alongside Lombardy industry, and its citizens, with a strong sense of innovation. “The Apple world in a superstar shop. Milan, the capital of the ‘app economy’”, enthuses the Il Sole24Ore newspaper (25th July) as it focuses on this project from the Norman Foster studio and reminds us that the entire economic segment of digital apps provides work for 25 thousand people. And the mayor, Beppe Sala, adds: “From Apple to the outskirts of the city, this is how we re-invent Milan”, noting that Siemens has just opened its new headquarters on the edge of the Adriano District, a rather run-down suburb, and reminding us about the many other town planning novelties, from Porta Nuova to CityLife, from the Bicocca to the Human Technopole, and how we are currently awaiting the inauguration of the new Starbucks centre in Piazza Cordusio, one of the group’s biggest investments in Europe.

There are over 4,200 foreign-owned companies, in Milan, representing 208 billion Euros of sales, a third of the Italian total and employment for 431 thousand people. And the Assolombarda calculates that it is precisely thanks to the presence of these companies that a favourable comparison can be made between Milan and the other most dynamic metropolitan centres, from Chicago to Barcelona, and from Munich to Frankfurt or the great cities of London and Paris.

Here is the point: Milan is continuing to grow by attracting capital and know-how from almost every corner of the world, into its universities, into its manufacturing companies and its services, into the extraordinary segment of life sciences  (now renowned internationally for its excellence), and into its property sector. And it can serve as a reference point for the rest of the country and as a locomotive for its growth, with a European dimension. It cannot close itself down, therefore. Indeed, it must continue to insist upon its tradition as an open city. As are well aware all its social protagonists, who watch with annoyance the current policies of protectionism, chauvinism and argumentative choices with the EU (which needs reforming, certainly, but not by irresponsibly seeking to drive it into a crisis and destroying it). Europe is a key word, in the context of the cultural and conceptual history of business. In respect of which the tiller should be firmly held in the direction of future growth.

We must ask ourselves, then, the fundamental question of whether we want growth or slowdown. The former is balanced and sustainable, according to the shared recommendations of Pope Francis as well as a substantial part of the best economic literature and in line with the choices for competitiveness made by the most innovative businesses and those which are most attentive to the social and ethical questions of economic development. The latter, in contrast, is never pleasant (with all due respect to the domestic followers of Serge Latouche) and, if anything, is laden with constraints which lead towards a comprehensive impoverishment. A slowdown which – it is worth adding – combines with the ideology of those who say “no” (to the TAV high-speed train infrastructure, to methane pipelines, to the Pedemontana Como motorway by-pass and to the Terzo Valico port/rail link which should finally connect the port of Genoa to the regions of the Po valley which are the most productive in Europe, to public works, to infrastructure, and to the modernisation of our country), carries the flavour of egotistical provincialism which the Anglo-Saxon media have for some time referred to as “nimbyism” (from “nimby” – not in my backyard)  and which, in its hostility to market and business culture, seems ever-more-inclined towards a passion for public exposure (according to a survey by SWG-Corriere della Sera, 18th July).

The problem is that wealth, before it can be distributed, must first be produced, thanks, indeed, to the commitment of businesses and workers. And it is from this same wealth that, via taxation, are derived the resources to pay the salaries of public workers too. Obvious concepts, naturally. But which are worthwhile repeating, in times of increasing economic and scientific ignorance, of illusions that there exists an idealogical “toyland country”.

Businesses, as creators of wealth, jobs, well-being and also welfare (this is also documented in many of the recent employment contracts, both for industry sectors and permanent employment with specific companies, which we spoke of in last week’s blog) are thus returning to the forefront of the debate. And the mass protests in the Veneto region (a land of small and medium-sized businesses, not major international groups) are right to rail against the new constraints on employment of the so-called “dignity” decree, attracting the close attention of the governor of the Region, Luca Zaia, a member of the Northern League, who is worried about an electorate who have always considered the Northern League to be close to the world of manufacturing and who are now witnessing with dismay the anti-industrialist tendencies of the Five-Star Movement in key roles of government.

The protests in the Veneto region are naturally not simply an isolated regional case. In Lombardy there is considerable alarm at the anti-corporation climate on the part of the chair of the Assolombarda, Carlo Bonomi, and of the chair of the Lombardy Confindustria association, Marco Bonometti (a steelworker from Brescia, the land of dynamic small and medium-sized businesses which are open to the world). In Piedmont, concerns are emerging from Dario Gallina, chair of Turin’s industrialists: “the first measures of the government show all the signs of an anti-industrial drive”.

The voices being heard, then, are those of the core part of what for some time has been defined as “the GDP party” (that brilliant definition is from Dario Di Vico, in the Corriere della Sera newspaper): industrial confederations, banks, tradespeople, financial institutions and, with the exception of representational bodies, all that diverse and complex world of business which during these recent difficult years have learned how to react to the Great Crisis and have invested, innovated, conquered a role for exports and investment overseas, and have reacted with considerable success to the extremely hard challenges of the digital transformation of the economy, and the turning point of Industry4.0  (strongly supported by intelligent fiscal assistance measures introduced firstly by the government of the centre-right and then by that of the centre-left).  It is a world full of know-how, creativity, and entrepreneurial spirit yet also sound civil instincts for a sense of community and inclusion. Which has every right to be listened to and taken carefully into consideration. A world whose “dignity” should be recognised, appreciated and supported.